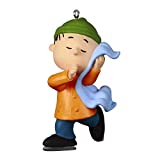 One thing I enjoyed about the miniature ornaments of the Peanuts gang skating that Hallmark released last year was that the character’s personalities came through.  Nowhere was that more evident than with Linus.

If you know Linus, you know what to expect.  Yes, he’s skating, and he’s in his typical orange coat and green hat.  And what else does he have with him?  His trusty security blanket, of course.  He’s holding it in his left hand, and he’s sucking the thumb on his right hand.  And yes, he’s skating out on the ice confidently.

Linus, in many ways, is the character who just goes with the flow the most in the Peanuts comic strip, and that’s what I feel is captured here.  And I love it for that reason.  He’s doing his thing and enjoying it.

Once again, I will point out this is a miniature ornament.  Linus is only about an inch in size.  When you consider that, it makes it even more outstanding that they so expertly captured not only Linus’s looks but personality.

Linus is gliding on one of his skates, so this ornament won’t stand on its own.  Given the size, you might not want to set it out anyway.  It’s not a problem since it hangs perfectly straight.

If you like Peanuts and miniature ornaments, you’ll want to track down Linus.  I know I’m glad I have him in my collection.