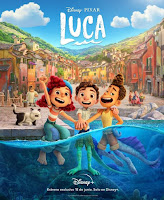 Stars: 5 out of 5
Pros: Characters, plots, animation, pretty much everything
Cons: “Silenzio Bruno!”
The Bottom Line:
Curious Luca
A creative adventure
Sure to entertain

I’ve got to admit, I wasn’t that intrigued by the original artwork we were seeing for Luca.  But, since it was a Pixar movie, I knew I’d see it at some point.  Then came the first trailer, and I was hooked.  It looked like it could be another classic Pixar movie, so I couldn’t wait to watch it.

This movie tells the story of Luca (voiced by Jacob Tremblay).  He just happens to be a sea creature, who spends his days tending his family’s flock of fish.  Despite warnings from his family, he dreams of life above the surface and is fascinated by the human monsters.  (That’s us.)

His life changes when he meets Alberto (Jack Dylan Grazer).  Alberto is another kid about his age, but he lives part of the time above land, where both of them are able to appear like the human monsters when they are dry.  Alberto lives on an island, and he and Luca quickly bond over dreams of getting a Vespa and traveling the world.  Their only hope of actually doing that, however, is venturing into the human village on the mainland.  That’s when they meet Giulia (Emma Berman) and learn about an Italian triathlon that might give them the prize money they need to buy a Vespa.  Will they be able to win?  Or will Luca’s parents find him first?

I will start by getting the one thing that bothered me out of the way.  Luca disobeys his parents and runs away from home and it is essentially what starts him on this adventure.  It’s nothing new in a kid’s film, and I get that there is a need to give the kids a chance to star in the story.  Additionally, Luca’s father seems pretty clueless much of the time.  I’m noting these things only in passing, however.

Because, on the whole, I loved this movie.  As you’ve probably noticed from my teaser, this has some bits that are classic Pixar.  You know what I mean, those things that you would never have thought of, but fit perfectly in the world they are creating, like the way Luca’s life under the sea works and mirrors our own.  It’s those little things that make a Pixar movie so special.

And the animation is beautiful.  Yes, the main characters are stylized, but the setting is richly detailed.  There are some shots that show off just what animation can do.  Not every shot is that way, but the ones we get are gorgeous.

Of course, a movie is really only as good as the story.  Here, again, the movie shines.  There are several conflicts that run through the movie, and that always keeps us engaged.  I loved how those conflicts came together for a spectacular ending.

But it is the friendships among the main characters that are the heart of the film.  They are what make the climax perfect.  It couldn’t have ended any other way and been as satisfying.  I might have teared up as I watched it.

Not that the film is all emotional.  There are plenty of laughs along the way as well.  We’ve got funny lines and sight gags, so the usual for a Pixar movie.

The voice cast is wonderful.  I’m not familiar with them, but that just allowed me to get fully engrossed in the story that much faster.

I already can’t wait to watch Luca again.  This is a movie destined to be another Pixar classic.  Don’t wait to enjoy it.