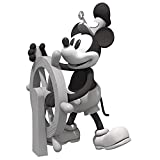 Stars: 5 out of 5
Pros: Sepia toned iconic pose
Cons: Not super steady if set out
The Bottom Line:
Back to beginning
Celebrating Mickey’s start
With iconic pose

Ending at the Beginning

I’ve really been enjoying the Mickey’s Movie Mousterpieces ornament series from Hallmark, so I was sad to see that it is ending with this year’s entry.  But that are truly ending with a classic – Steamboat Willie.

Steamboat Willie, of course, is the first Mickey Mouse cartoon released.  It was the instant hit (the addition of sound helped), and it helped launch Disney’s career and the Disney company to what we know today.

And, given that, this ornament won’t surprise fans too much.  We’ve got Mickey is his classic pose from the very start of the short.  He’s holding the wheel of the boat and looking out at the river.  Since the short is in black and white, Mickey is in sepia tones.  He’s not truly white but a light gray that works well to capture the look and feel of the short.

This is an iconic look, so when I first saw this ornament, I was sure Hallmark had already done it.  While they had done something similar for the 90th anniversary in 2018, it had other elements to it.  This is the first ornament I have from either Hallmark or The Disney Store to feature this iconic pose.

And I love it!  It needs to be in any Disnerd’s collection.

The ornament does stand up.  Thanks to the post holding the wheel and Mickey’s feet, you can set it out.  However, it isn’t super steady.  I wouldn’t put it out anywhere that is high trafficked because it could be bumped and fall over easily.

Also, Mickey’s tail seems a bit fragile, so you’ll want to take care that it doesn’t break off.

If you are going to hang the ornament, you’ll be delighted to find that it hangs perfectly straight.

While this is the final ornament in the series, the series did last ten entries.  While I can think of other iconic (and some lesser known) shorts I would have loved to see in the series, ten is a respectable number.  And you’ll find the 10 in a Christmas tree series marker on the bottom of one of Mickey’s feet.

Even if you weren’t collecting the rest of the series, Steamboat Willie is so iconic that you’ll still want to get this ornament.  It will look great on any tree for years to come.

Missing a star turn?  Here are the rest of Mickey’s Movie Mousterpieces.