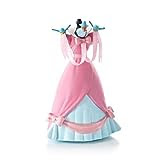 Pros: Good ornament made great by the song clip
Cons: A little plain, very slight tip
The Bottom Line:
Would have passed it by
With song took a second look
Really glad I did

A couple years ago, Hallmark released an ornament I hoped would be the start of an unofficial series.  It was Cinderella with a scene from the movie on her dress; it even played a song.  I was hoping they would do similar things for other movies.  However, they have revisited the idea with 2013's Cinderelly! Cinderelly!  And it's proving to be a popular ornament this year.

This ornament is an actual scene from the movie.  As you might guess from the title, it's when the animals, mainly the mice, are working on Cinderella's dress - the first one that her step-sisters destroy.  This dress is mostly pink with some blue showing down at the bottom.  And we've got a mouse up at the top working on it.  One of the female mice.  I must admit it's been so long since I've seen the film that if they have names, I don't know what they are.  Anyway, this particular mouse is dressed all in blue and is standing where the head would be on the dress.  There's a blue bird on each shoulder, and they are holding a ribbon.  While most of the ornament is plastic, the ribbon is real ribbon.

And this is a magic ornament.  Hallmark uses that to denote ornaments with sound, light, motion, or some combination of the three.  In this case, the ornament has sound.  When you pressed the button the right hand side, you get just about 20 seconds of "The Work Song," the song the mice sing while sewing this dress.  It's a great clip, although it will get the song stuck in your head the rest of the day.  It's a catchy one.  The sound quality is good and the voices sure sound like the original to me, although I must admit it's been a few years since I watched it.

I normally praise the detail on ornaments I like, and in this case there isn't much to praise.  It's a dress.  There are some nice pleats at the bottom, but that's about it.  The animals at the top do look very nice, but they are small.  Still, I really do love this ornament, and it all has to do with the song.  I wouldn't have even touched it otherwise, but it brings a smile to my face and makes this a must get ornament for this DisNerd.

The speaker for the sound is on the bottom, so there are three small knobs down there to keep the bottom off the ground.  They also allow the ornament to stand on any flat surface.  Also on the bottom, you'll find the area to insert the batteries you need to get the song to work.  It takes two button batteries, and your first set comes with the ornament.

But what if you want to hang the ornament?  The ring is located behind the fake head of the dress dummy that the dress is hanging on.  With it back there, I was worried this ornament would really tip forward, but it doesn't.  It tips slightly, but it's not enough to be a problem.  Only the most picky will notice, especially when you have it mixed in with branches on your Christmas tree.

I'm not the only one who loved Cinderelly! Cinderelly!  This ornament sold out quickly during premier back in July and several of the stores around me are still waiting for reorders to come in.  If you love the movie and the ornament appeals to you, I suggest hunting down a copy sooner rather than later.  I think it's going to stay hot.