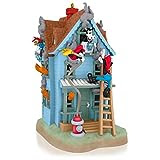 Stars: 4 out of 5
Pros: Details, motion, sound, Clarabelle
Cons: Must keep cranking to enjoy the magic, could break easily if dropped
The Bottom Line:
A couple of flaws
Don’t dampen my enjoyment
A DisNerd must have


Delightful and Surprising Ornament if Willing to Spend the Money

For me, one of the biggest surprises of Hallmark’s 2015 line was Mickey's Fire Brigade.  Why?  First off, they released an ornament based on this short last year as part of the Mickey’s Movie Mousterpieces series.  Second, I’m surprised they created an ornament this elaborate and expenses based on one of the shorts.  Having said that, I really do like it.

The short features Mickey, Donald, and Goofy as firemen called to the scene of a burning building.  Of course, the fire gets out of hand (mainly because it is alive and fights back).  Additionally, they have to try to rescue the clueless Clarabelle Cow who is taking a bath in the upstairs of the house.

This ornament captures the mayhem pretty well.  The main part of the ornament is the blue house, which is square.  We can see gray smoke and clear orange flames coming out of the windows.  In the front, we have Clarabelle in the tub hanging out of the upper window with Goofy on a ladder trying to get to her.  Mickey is being spun around on a hose while Donald is dumping water on the fire on the side of the house from a different upper story window.

Yes, you read that right.  Clarabelle Cow is actually in an ornament.  And all the DisNerds like me just rushed out to buy it.  I must confess, that was a huge draw for me.

This ornament is a magic ornament, which in this case means it has added sound and motion.  The ornament takes three button batteries, and your first set is included for you.  When they are installed, you turn the crank to get the action started.  You’ll see Clarabelle tip in and out of the window, Donald and the flames bob as well, Goofy’s ladder rocks back and forth, and Mickey turns round and round on that hose.  Meanwhile, you’ll hear music, sirens, and other sounds from the short.

Taken together, this ornament is a lot of fun.  No, the scene the ornament depicts is not strictly from the short.  Here’s the thing, I don’t care.  All of these elements happened at some point, and taken together it provides a great summary of the short.  (A shorter short?)  The motion is fun and the music is wonderful.

Plus, have a mentioned that we get Clarabelle?

The ornament has a nice flat base, so you can set it out to enjoy year round.  After all, there’s nothing specifically Christmas about it.  Meanwhile, there is a hook you can use to hang it on your Christmas tree.  It is heavier than your average ornament, so plan accordingly when you place it on your tree.  It tips slightly forward, but it’s not too bad, and you’ll find it easy to disguise with branches on the tree.

I do have a couple of complaints.  First, I hate having to use a crank to get the magic aspect to work.  And you have to keep cranking it.  Since the ornament is really powered by batteries, I don’t see why they couldn’t have used a button like they usually do for their magic ornaments.

This is couple with the fact that the ornament appears a bit fragile.  The smoke and flames look like they could snap off easily if you drop the ornament.  This is made of plastic, after all.  When you consider the price, why would you want to make something that fragile and then increase the temptation to touch it, thereby increasing the likelihood that it will break?

On the other hand, the detail is wonderful.  There is a lot happening in a very small space, but it looks great.  Because of the size of the scene, the characters are small, but they still look really good.  The movement and music add a great touch.  Plus, we get Clarabelle on an ornament.  (Or have I mentioned that fact already?)

Yes, I have a feeling I would have bought this ornament no matter what it was like because Clarabelle was part of it.  However, I am mostly pleased with Mickey's Fire Brigade.  It’s one I will carefully enjoy for quite some time to come.