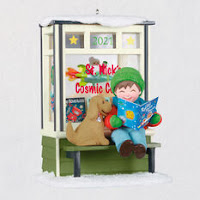 This Comic Store is Out of This World

I’ve stopped a few of the Hallmark ornament series I started to collect over the years.  Every year, I think about stopping The Christmas Windows series, but every year, it is so cute I just have to get it.  2021’s entry is no exception.

This year, we are visiting St. Nick’s Cosmic Comics.  The front of this store is almost completely glass window with the shop’s name and some stars on it.  We also have the address, which just happens to be 2021.  A little boy and his dog are sitting on the bench in front of the store reading a comic he just bought – Rylan’s Space Shuttle.  Behind him in the store window, we can see Santa in a rocket ship orbiting what I think looks like the moon.  Underneath Santa are a few comic book titles in the window. 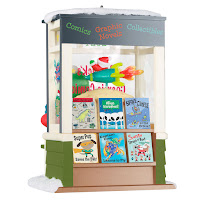 When you turn the ornament around, you can see the window from the inside of the store.  We’ve got more comics on display as well including titles like “Alien Invasion” and “Santa Drops a Beat.”  Above the window promises that the store contains “comics, graphic novels, and collectibles.”

Since Hallmark has licenses with the two biggest comic book companies, I’m a little surprised that we don’t have real comic books in the ornament.  Maybe they wouldn’t agree to both be in the window.  Or maybe the artist just wanted to create some of her own.  I’ve got to admit, the space theme is fun, and the couple of seasonal titles are great.

Unfortunately, as cute as this ornament is, it isn’t extremely Christmassy.  I almost feel like the nods to Christmas are after thoughts instead of the main focus of the window.  While not every store goes all out for the holiday in real life, I would think they would in this town since the series is called Christmas Windows.  But I’m being a little picky.  The ornament is cute, which is why I decided I had to have it.

Being the window of a building, this ornament sits flat.  You’ll find the series marker on the bottom.  Yes, we really are up to nineteen in this series.

Usually, the ornaments in this series are pretty reliable for hanging straight.  However, this one tips noticeably forward.  It will be easy enough to hide among the branches of your Christmas tree, but that is a disappointment.

This ornament has a couple of drawbacks, but it is still cute.  If you’ve been collecting the series or love comics, you’ll be glad you picked up 2021’s addition to the Christmas Windows series.

Window shop with the rest of the Christmas Window series.