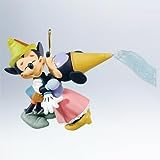 Minnie Provides the Right Motivation for the Brave Little Tailor

One of the many classic Mickey Mouse shorts is "Brave Little Tailor," which finds our hero, through a series of misunderstandings, facing a giant.  When he realizes what he's gotten himself into, Princess Minnie offers to marry the hero and starts kissing him.  Before he knows it, Mickey has agreed to the task.

This ornament from Hallmark, released in 2011 captures that moment.  Minnie has Mickey in a big embrace.  He already has the marks of several kisses all over his face, and Minnie is leaning in for another one.  They are both wearing their costumes from the short - Minnie is a pink dress and a hat with a flowing piece of fabric coming from the top.  Mickie is in a blue tunic with his scissors in his left hand and his green hat with a (plastic) feather on top.

Wait, what?  As I discovered when I rewatched the short to write this review, Mickey actually didn't have his scissors or hat on for this scene.  However, the look is just a part of the short the ornament wouldn't have been as effective without it.  It's worth noting only in passing.

The rest of the scene is captured perfectly.  Mickey and Minnie both look like they are smiling - Mickey is for sure.  It's such a cute moment, and it makes for a cute ornament.

Looking at a picture, you wouldn't expect the ornament to be that stable, but it actually stands up rather nicely on it's own.  It's not the most stable ornament out there, but as long as you put it on something that isn't bumped too hard very often, you should be fine.

This is the kind of ornament that Disney fans will love since it captures such a fun moment from a classic short between Mickey and Minnie.  I'm enjoying having Brave Little Tailor.