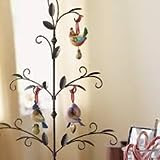 Stars: 5 out of 5
Pros: Fun stand for display a dozen ornaments
Cons: Ornaments tend to twist and turn
The Bottom Line:
An ornament tree
Waiting to be filled with your
Twelve favorite ones


It's Not a Pear Tree, but You Can Hang Your Partridge in It

In 2013, Hallmark rereleased the first two ornaments in their popular current 12 Days of Christmas series, much to collector's dismay.  They also released a stand they called an Ornament Tree.  While it will work for any ornaments you want to hang there, it was obviously tied into that series.

The stand itself is metal with an antiqued gold finish on it.  It actually goes together in several parts, so you can put all three levels together to have enough space for 12 ornaments, or you can just put out enough levels to hold the ornaments you want to display.  Of course, the stand just doesn't look quite as good without all three levels screwed together.  Personally, I put it together and left the bottom levels empty this last year, and that is probably what I will keep doing.

The stand is two feet tall and just over a foot wide.  Even so, there is just enough room for an ornament and a very small hook.  Trust me on this, the size of the ornaments you display there matters.  Anything too big won't work at all.

The stand is described as a tree, and I can see that to a certain extent.  The various branches curl out from the pole in the middle and there are a few leaves scattered on it here and there.  However, it is obviously a display stand, and that is obvious.  Now, don't get me wrong, it looks very nice.  And filled with ornaments, it looks even better.  But without anything on it, it does look rather plain.

Did I mention how easy it is to put together?  The pieces just screw into place, and at the bottom is a nice solid stand that holds the display steady.  I put mine together in just a couple of minutes last year, and took it down in the same amount of time.

My only complaint is that it is really hard to keep the ornaments turned so they are looking into the room.  With how the hooks go over the display branches, my ornaments kept wanting to turn sideways.  It's a minor complaint overall.

So why is this associated with the 12 Days of Christmas series?  I think it is simply because it was designed by Edyth Kegrize, the artist behind the series.  It does feature a bit of that whimsical feel to it that the series does.  And, of course, it was released back in October when the first two ornaments in the series were rereleased.  As the box says, you could use this to display any 12 ornaments you wanted, however.

The stand proved to be very popular.  Box price is listed at $50, but it was only $30 if you made a qualifying purchase during Ornament Debut last October.  My favorite Hallmark store sold out of the stand on Saturday, and I barely got the last one across town Sunday afternoon.  See what happens when you debate whether you truly need it or not?

But I'm glad I got it.  I put it together that weekend and left it up until January.  I have a feeling it will go up early again this year.  I love the 12 Days series, and this Ornament Tree is a perfect way to display it.

Of course, you'll need to get all of the 12 Days of Christmas series.

Original Box Price: $49.95 (but discounted when originally released)
Posted by Mark Baker at 6:27 AM