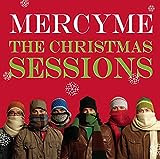 Pros: New arrangements breathe fresh life into classic carols.
Cons: Only one new song
The Bottom Line:
Non-traditional
Which is good mid-December
For something different

Many artists change their signature sound when releasing a Christmas album, going for the more traditional sounds of 40 years ago. These CD's are instant classics that feel like old friends the first time they are spun.

Other artists decide to release Christmas CD's that stick with their normal sound, whatever that may be. These projects take a few years to grow on the listener, but they often become favorites because they offer something different from everything else. The Christmas Sessions falls into the second category.

Mercy Me has made a name for itself in the Christian music industry with three highly successful projects already under their belt. While I wouldn't exactly classify their sound as straight rock, they are certainly rockier then many adult contemporary artists they are often classified with. They take their guitar driven music and wrap it around some Christmas classics. The result is unsurprisingly great.

Eleven of the twelve tracks on the CD are well known standby songs like "It Came Upon the Midnight Clear," "Winter Wonderland/White Christmas," "Drummer Boy," or "O Holy Night." Each track features drums and guitar heavily. For example, you can really hear the drum and bass on "O Holy Night." It's an arrangement that I wouldn't have thought of, but it works.

Each of these songs is sped up, some more then others, from what you are used to. You might not be able to sing along the first time through, but by the second or third you will hit all the notes along with them since they do stick with the original melody. Occasionally, the also through in new words, as in "Gloria." And for those wondering, this isn't a new take on Michael W. Smith's classic reworking, but an arrangement that sticks much closer to the original carol.

There are a couple tracks that don't work as well. "Christmas Time is Here" isn't a fast song. Of course, it's also ruined by the fact that someone with a good voice is singing it. I will forever only love the version from the Charlie Brown special. "Silent Night" becomes a country church version that would have fit on lead singer Bart Millard's recent hymns project. I don't care for the arrangement, but those who enjoy upbeat country will.

My biggest disappointment is the lack of original songs. The final track, "Joseph's Lullaby" is the only new song. Appropriately enough, it is the slowest track here. This piano driven ballad is a tender take on what Joseph might have sang to Jesus that first Christmas night asking for a good night sleep before the reality of saving the world becomes His burden.

It will be a couple years before The Christmas Sessions is one I reach for at the start of the Christmas season. But it will be one that gets lots of play this year and in years to come.