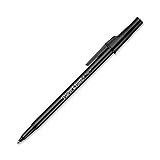 Pros: Cheap, work
Cons: Cheaply made as a result
The Bottom Line:
Cheaply made and priced
Value for money is great
But still average


For the Price These Pens are Good.  But They Aren’t My Favorite

There are a wide variety of pens on the market, but Paper Mate seems to have cornered the market on the cheap pens.  Their Write Bros. Stick Medium Tip Ballpoint Pens are everywhere.  They do the job and are cheap, but they aren’t anything special.

The reason these are so popular is the price.  A box of 12 is under $4.  Seriously, how can you go wrong with that?  And they work.  I had one I was using for over four months before it ran out of ink.  For the price, less than a third of a dollar per pen, that’s a great deal.

The problem is, these pens are nothing fancy.  The outside is hard plastic the color of the ink.  These are black, but they also come in blue and red.  The problem with the hard plastic is that when you are writing something long (like a government form), the pen becomes uncomfortable quickly.

The pens have a cap held on by friction.  They stick hard to the side the actual pen is on, which is a good thing.  After all, you don’t want to accidentally get ink on things, right?  However, sometimes, the cap has gotten so stuck on the pen it’s almost impossible to get it off.  The cap will slip onto the other side when you are writing.  It drops into place securely, but not quite as firmly as on the writing side.

Another mark against these pens is the ink flow.  Once you get the ink flowing, the pens work fine.  But if you haven’t used them for an hour or to, it takes a squiggle or two to get them going again.

Since the sides are hard plastic, you can’t see how much ink is left in the pen.  As a result, a few times, I’ve had to make sure it was out of ink and not just a case of the ink not flowing any more.

Really, for the price, what do you expect?  You get what you pay for, and the value is certainly good.  But on the whole, I find Paper Mate's Write Bros. Pens to be average.
Posted by Mark Baker at 10:58 AM