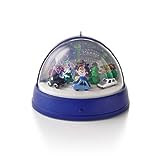 Stars: 5 out of 5
Pros: The magic of the middle makes this ornament great
Cons: The rest is okay, but not nearly as special
The Bottom Line:
The center divide
Brings smiles, fun to ornament
With lots of music

Gets My Vote for Best Magic Cord Ornament of the Year

Of the magic cord ornaments Hallmark has released in 2013, Santa's Magic Cuckoo Clock seems to be the clear favorite, and I certainly do like it.  However, for my money, Holiday Park is actually the better ornament.

The ornament itself doesn't look like much, and I wasn't planning to buy it at first.  It looks like a snow globe, only without any actual snow to move around.  The ornament has a blue base and back with a clear piece of plastic half way through the scene.  (We'll get back to that plastic in a moment).  In the foreground there are three cars circling around a light up Santa and two Christmas trees.  It's hard to see what is in the background, but there are two cars, a light up snowman, a light up tree, and a regular tree back there.

As I said, it really doesn't look like much, which is why I was going to dismiss it.  At $29.95, it's hard to get excited about spending that kind of money on an ornament unless it is really special.

Then I hit the button on the front that starts the music and light show, and I fell in love.

The ornament actually plays three songs, "Jingle Bells," "We Wish You a Merry Christmas," and "Up on the Housetop."  All three of these play back to back when you press the button, giving you about a minute of music.

Now remember I said we'd come back to the plastic later.  Here's where it comes into play in a big way.  The various things painted on it actually light up when the music is playing.  There are stars, a Merry Christmas sing, and three snowmen.  The lights on the plastic flash in time to the music, meaning one of the showmen waves his hand and the stars and sign flash.  It looks amazing and brought an immediate smile to my face, something that hasn't diminished a bit in the times I've hit the button since.  That's what makes this ornament special.

Sadly, the signs don't light up unless you've hit the button on this particular ornament.  And, of course, to get it to light up at all, you need the magic cord (sold separately for $5.95).

Like any good snow globe, this one has a flat bottom, so you can set it out to display if you don't want to hang it on your tree.  When you go to hang the ornament, you'll find it tips slightly to the right, which is a bit surprising since the hook looks like it is in the middle of the globe.  But it's not bad enough that it hampers your enjoyment one bit.

If it weren't for the middle plastic part of this ornament, I never would have bought it.  But that magic makes this ornament so much fun.  I know I will be enjoying Holiday Park for many years to come.