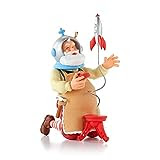 Stars: 4 out of 5
Pros: Fun toy for older kids
Cons: The silver strand holding the rocket in the air.
The Bottom Line:
Rocket launch is now
Santa working on fun toy
For older children

Blast Off with 2013's Toymaker Santa

Santa doesn't just make toys for little kids - at least not in this series from Hallmark.  In previous entries, he's made slot cars and remote control airplanes.  And for 2013's Toymaker Santa, he's made a rocket.

The ornament features Santa kneeling down next to a red launch pad that looks like a stool.  On his head, he has a silver helmet.  His right hand is holding a remote control.  Santa's just pressed the remote control since a silver rocket is flying off the launch pad.  Like the other ornaments in the series, Santa is wearing a tan work apron with a hammer slung in the loop on one side.

Now here is my only problem with the ornament.  The rocket is actually quite a ways from the launch pad.  In fact, it's nose is above Santa's head.  In order to get it up there, it is connected to the launch pad with a silver wire.  The wire is stiff enough to hold the rocket in place, although it does have some give (not that you want to play with it and run the risk of ruining the ornament, or course).  The same thing was done in the remote control airplane ornament, and it doesn't bug me at all there.  But here, for some reason, I find it a little off putting.  I still like the ornament, but I feel that metal takes away from the overall look.

I honestly wasn't completely sure how this ornament would sit from looking at it.  However, Santa's toes and knees and the launch pad make enough of a base that you can display it on any flat surface if you choose to.  It's steady enough it would take a good thump to tip it over.

The ring for hanging the ornament is off to the side of Santa's helmet.  The ornament is perfectly balanced since Santa and the launch pad hang straight when you slip a hanger through that loop.

Since there is no flat official base, the copyright information and series marker aren't on the bottom of the ornament.  They were in the second place, I looked, however.  I'll leave it to you to find them.

I am coming to appreciate the silver spike a bit more since it allows the rocket to lift off.  So while I do like 2013's Toymaker Santa, it's not my favorite in the series.