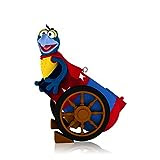 Stars: 3 out of 5
Pros: Balance; captures look well; fun idea
Cons: A bit overwhelming on size; sound clip isn’t as fun as could be.
The Bottom Line:
A fun idea
Execution not perfect
Wish it were better

Sometimes, the idea of an ornament and the execution of an ornament just don’t quite work.  I mean, what’s not to love about Gonzo, the blue Muppet known for his outlandish stunts?  But in this case, The Great Gonzo just doesn’t quite work like I would like it to work.

The ornament features Gonzo in one of his classic stunts.  In this case, he’s crawling into a big blue cannon.  As a result, the ornament features Gonzo’s head sticking out of the cannon.  And it is blue.  After all, Gonzo is that blue Muppet that looks like nothing else with his big hooked nose, and I mentioned the cannon is blue, right?  Still, there are some other colors since there is red on the cannon as well plus Gonzo is in a yellow and red costume.  With Gonzo looking at us, it is a fun ornament to look at.

However, it just seems a bit too big and clunky to me.  I didn’t wind up doing as much decorating as normal this year, so I didn’t have my other Muppet ornaments out to compare, but he seems bigger than the rest to me.  If I stop and think about it, that probably isn’t really the case, but that’s my impression from looking at him.  Either way, the end result is a big, blue ornament on your tree.

However, my real problem comes from the sound.  Yes, like the others in the unofficial series, this is a Magic ornaments.  Just insert the two button batteries and press the button and you get to hear a clip from the sketch they are recreating with the ornament.  In this case, Gonzo is planning to shoot himself out of the cannon, across the stage, to land safely in a glass of water.  Instead of the others that have multiple sound clips that play in order, this just has one long one that runs about 40 seconds.  We get to hear Gonzo describe the stunt and then yells, crashes, and bangs as he carries it out.

So here’s my problem.  If I could remember this scene, I might enjoy it and laugh when I push the button.  Instead, I’m left trying to picture the outcome from the sound effects – and that doesn’t work as well.  Yes, I did try to search for it, but let’s be honest, Gonzo tried so many different stunts it’s hard to find one in particular.

And maybe I’m just being a big grump here.  Bigger fans of The Muppet Show probably know the episode and love this ornament as a result.  Visually, it looks good, it’s just I don’t connect with it as well as some of the others.

The good news is you can display this ornament year round.  Yes, there are wheels on the cannon, but they don’t turn and are attached to blocks.  With how the cannon is tipped, you have a nice base to display the ornament on any shelf, table, or desk you choose.

And the ornament is perfectly balanced for hanging as well.  The loop is right in the middle near the back of Gonzo’s cape.  That proves to be the perfect place because the ornament is completely level when it hangs.  Unfortunately, with how everything is tilted normally, you need a really long hook to get any kind of distance between Gonzo and the Christmas tree.  Even then, you might find his head disappearing in the branch you hang the ornament fromt.

So maybe I’m just not enough of a Muppet fan to truly appreciate The Great Gonzo.  Or maybe this one sounded better on paper than it actually turned out.  Either way, Muppet fans will love it although most people will be able to pass it up with ease.