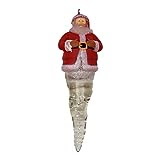 Stars: 5 out of 5
Pros: Fun combination of Santa and winter
Cons: Not as many collectors seem to like
The Bottom Line:
Proving that Santa
Is cool as an icicle
Fun and different

After so many years of creating ornaments, I’m sure that the artists who create the Hallmark Keepsake Ornaments have a difficult time coming up with something new and different.  I know I would.  That’s why I like the Cool Icicles series, which takes various Christmas icons and uses them with icicles.  It’s creative and fun.  Santa was the second offering in the series, and he’s fun as well.

The ornament features Santa in a classic pose.  He’s wearing his red hat and suit and holding his hands at his waist.  However, just at the point where his legs and pants would normally be, he starts to tapper down to a clear icicle point.

I will admit, I had hoped that the bottom half of this ornament would be a clear red, however, the more I looked at this ornament, the more I liked it completely clear.  The top part is mostly opaque, but it’s not as solid as an ornament normally would be.  The result is lovely when you put it on a lit Christmas tree.  The lights sparkle and shine through it, and it is just fun.  There is also glitter on the white trim on Santa’s suit and hat, which really does add to the fun.

Plus there’s the creativity aspect of the ornament.  Combining characters with a winter symbol this way isn’t something I would have thought of, but it adds a fun touch to the tree.  Unfortunately, the series doesn’t seem to be super popular, but I really like it.

Because of the point at the bottom of the ornament, you have to hang this one on your tree.  The loop is on the top of Santa’s head, and it’s no real surprise that he hangs straight.

Looking for the series marker?  Take a look at Santa’s backs.  It’s small, but you can find a 2 in a Christmas tree there.

So if you are looking for Santa is a slightly different context, track down the second Cool Icicles ornament.  This is something fun you can enjoy for years to come.

And if you like this fun idea, you'll want to check out the rest of the Cool Icicles Series.