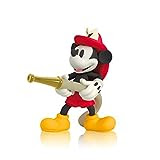 Stars: 5 out of 5
Pros: Good pose from a fun Mickey Mouse short
Cons: Can’t stand up on its own
The Bottom Line:
Rush to put fire out
Great short and fun ornament
Hangs great on your tree


The Third Mickey’s Mousterpieces is One Hot Ornament

I know I have seen all of the Mickey Mouse shorts.  I bought the Walt Disney Treasures collections and have watched all of them.  However, that doesn’t mean I really remember them all, so I am taking the ornaments from Hallmark’s Mickey’s Movie Mousterpieces series and rewatching each year’s short.  I’m finding that a fun way to rediscover some great animation, and that certainly was the case with Mickey's Fire Brigade.

The featured short is from 1935 and features Mickey, Donald, and Goofy rushing to the scene of a four alarm fire.  As they attempt to go about fighting the fire, they run into problems from wild fire hoses and a fire that fights back – literally.  It closes the windows and chases after them.  And then they discover Clarabelle Cow up in the bathroom oblivious to the danger she is in.  The creativity and humor of the short is wonderful.

But I’m not here to review the short.  Instead, I’m here to review the ornament inspired by it.  It features Mickey holding a fire hose all ready to fight the fire.  He’s dressed in his traditional red shorts and yellow shoes with a red fire hat on his head.  There’s the number 1 on his hat (and he was the only character in the short to have a number on his hat).  He’s holding the brownish-green colored fire hose with both hands and he’s smiling.  Little does he know what is about to happen.

The smile doesn’t quite match the scene from the short, but the rest of it is spot on.  The colors are perfect, too.  I love this series because it gives me a chance to collect something that represents these usually overlooked shorts, and this really is a great short.  Yes, the DisNerd in me completely approves.

Looking at the ornament, you’d expect that Mickey could stand on his own two feet.  Sadly, that is not the case at all.  They are actually at such an angle that they don’t both touch at the same time.  Further complicating things is the hose which actually sticks down below his feet.  Instead of the three points of contact you would expect from a quick glance, you have only one, and it’s pushing Mickey forward.  Then again, considering the craziness of the short, maybe that is appropriate.

However, you can hang this ornament without worry because it is perfectly balanced.  The loop is actually at the front of Mickey’s hat just above the 1.  It doesn’t look like it would balance, but it truly looks great when hung.

On the bottom of one of Mickey’s feet, you’ll find the copyright information and the 3 in a Christmas tree series marker.  On the other one, you’ll find the name of the short and the year it first came out.  Even though I store my ornaments in their boxes (I’ve got to figure something else out since it takes up too much room), I still love that added DisNerd touch on each ornament in the series.

It’s a shame you can’t stand this ornament since it really could be displayed year round.  However, it is still plenty of fun and a great reminder of the entertaining short Mickey's Fire Brigade.

Check out the rest of the Mickey's Movie Mousterpieces series.