Ornament Review: A World Within #7 - Gingerbread Man in a Gumdrop House - 2021 Hallmark Release 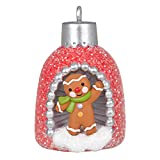 The Gingerbread Man Says, “This Ornament is Goody Goody Gumdrops.”

Over the years, Hallmark released an unofficial series of mini ornaments that featured gumdrops.  While I never bought any of those, this is clearly the inspiration for 2021’s entry in Hallmark’s A World Within mini ornament series.

You see, this year, the main feature of the ornament is a gumdrop.  It’s red, and the ornament is covered with glitter to represent the powdered sugar you might see on the treat.

But this is A World Within.  That means this gumdrop is serving as the home for a gingerbread man.  He’s standing in the doorway waving at us.  And his doorway is outlined in small silver pearls.

This ornament is cute – don’t get me wrong.  However, I do wish it had more to it than it does.  I’ve been in awe of the scenes that have been suggested in some of the others in the series.  While there is some amazing detail on the gingerbread man himself, we can’t see anything behind him.  That would absolutely blow me away here.  As it is, I definitely like this ornament, but it isn’t one of the best of the series.

Being a gumdrop, this ornament has a nice flat base.  You could easily set this out and display it if you so choose.  You’ll find the series marker on the bottom of the ornament as well.  Given the shape, it’s no surprise that the ornament hangs straight as well.

I mentioned at the beginning of the review that this is a mini ornament.  Keep that in mind before you purchase it.  It’s just over an inch tall.  That’s what makes the detail we do have so outstanding.  And I’m probably asking too much to have a scene behind the gingerbread man.

While this gumdrop house might not be the best ornament in the A World Within series, it is still cute.  Fans of the series will be pleased with it.

Here are the rest of the A World Within ornaments.