What's in the Bible? Review - Letters from Paul! - Volume 12 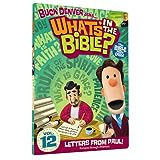 Stars: 5 out of 5
Pros: Explains deep theology easily with entertainment
Cons: Not quite as entertaining as most
The Bottom Line:
Takes theology
Makes it understandable
And fun to learn, too

Paul’s Letters Lead Us to Some Deep Theology

Phil Vischer’s series What’s in the Bible? is quickly winding down.  In fact, with volume 12, we’ve reached the penultimate release.  With the Gospels and Acts behind us, it’s time to dive into some deep theology with Letters From Paul!

Wait, deep theology with giant puppets for a target audience of early elementary kids?  Yep.  That’s exactly what is in store for us, but don’t worry that it will become dry.  There’s still plenty of entertainment value here.

As usual, this hour long video is divided into two half hour segments.  And they are very logically broken down.  We start with the usual recap, reminding us of what we’ve covered in the previous books of the Bible.  Yep, it’s getting longer every time.

But then we are introduced to letters in general. (You know, e-mail on paper.  Paper?  Um…)  From there, we spend the rest of the first half hour learning about the letters that the Apostle Paul wrote to the churches.  We get general themes and a little about the churches, including Paul’s connections to them.  And since this does cover all of Paul’s letters we do hear about the ones he wrote to individuals.  We learn about the order their order in the New Testament as well as the order they are written in.  All kinds of factual stuff like that.

From there, we hit the second half hour episode, and we start getting into the meat of what Paul wrote about.  This isn’t an in depth study, but then again, none of the videos in the series have been.  Instead, we get the general ideas that Paul talked about over and over again – grace, justification, sanctification – all those big words.  But don’t let this scare you or your kids away.  Each idea is broken down in ways that kids will understand.  And if you have never gotten the hang of some of these big words, you just might finally get them, too.

As I said, all this is presented with the usual high entertainment value from the usual cast of puppet characters.  The quick breaks between all of them certainly keeps your attention.  Because of the deep concepts covered, this isn’t the most entertaining video of the series, but it still kept my attention and will keep the attention of the kids.  Plus they’ll be learning Biblical truths.

I’ve often thought the pre-show segments with the Michael, the puppet kids who is watching these with his brother as they travel to grandma’s house, were pointless.  However, one of those just about killed me laughing in this video.  It made all of them completely worth it.

And there are still songs.  They’re the weak link in the video yet again, although not as bad as in some of the videos.  What really threw me was when, at one point, they repeat the same song as if it were brand new.  If it was a test, yes I was paying attention.

I am constantly amazed at how Phil is able to take so much scripture and make it easy to understand and relevant while still entertaining.  And he’s done it again with Letters From Paul!  I’m torn to looking forward to seeing him finishing this journey through the Bible and being disappointed that no more videos will be coming out.
Posted by Mark Baker at 9:05 AM

Email ThisBlogThis!Share to TwitterShare to FacebookShare to Pinterest
Labels: christian, kids, what's in the bible