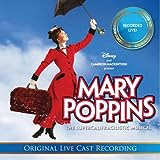 Stars: 4 out of 5
Pros: Old favorites and great new songs
Cons: A few don't work without visuals; too many Jane and Michaels
The Bottom Line:
Musical on stage
In front of live audience
Proves it's delightful

Last year, I finally got to see Disney's Broadway musical Mary Poppins.  Not surprising since I love the movie, but I loved the play version as well.  And since I love to get soundtracks for plays I've seen, I bought the Original Live Cast Recording afterward.

There are already two cast recordings floating around out there, which is surprising for a show that isn't that old.  I chose this one because they have made some tweaks to the show since it first opened, including adding the song "Playing the Game."  Since this is the version I saw, this was the version I decided to get.

You might have noticed that this is a live recording, something I don't remember seeing for other soundtracks before.  I was recording down in over the course of five nights.  The sound quality is excellent, and you'd never know it wasn't recording in the studio while the cast is singing.  You do get applause between most of the songs, which doesn't bother me at all.  The only time you get the audience over the singers is during the final "Bows" track.  No big deal there since they should be clapping.  The only real issue I have is that they used five different sets of kids to play Jane and Michael Banks over the course of those five nights, and you can tell since their voices keep changing between songs.  A minor point.

If you haven't seen the Broadway version of the show, you are in for some surprises.  Yes, you'll recognize many of the song titles from the movie, although not all the songs make it over.  However, their place in the play and at times the words of the songs are often quite different.  True, you get some songs like "A Spoonful of Sugar" that haven't been touched.  The same is true of the lyrics of "Jolly Holiday," although the setting is different and there's an interlude with the kids.  "Let's Go Fly a Kite" is lyrically the same as well.  The heart of "Step in Time" remains the same, and outside of a few pronouns, the didn't mess with "Feed the Birds."

But then there are the songs that are very different.  The best example is "Supercalifragilisticexpialidocious."  There are so many new lyrics to this song, it is an absolute delight.  I can't help but laugh at some of what they came up with.  And Mary Poppins really does say the word backwards here, not syllable by syllable like in the movie but actually taking the letters backward.  It's quite impressive.

And of course, there are the new songs.  "Anything Can Happen" is my favorite, and I think it's a song that Disney himself would have loved with it's optimistic look at life.  They repeat melodies and lyrics from some of the songs, most noticeably "Precision and Order" and "A Man Has Dreams" in multiple tracks.  It really helps give the soundtrack a more unified feel.

Then there's the song "Playing the Game."  It's a pretty song with a haunting melody in a minor key.  Yet it's a bit creepy as Mary seems to turn a bit mean as she brings Jane and Michael's toys to life to try to get the kids to treat them properly.  It was definitely the scariest part of the play, and that comes across in the song.

And that includes the songs sung by Miss Andrew, Mr. Bank's old nanny who appears at one point here.  Her two tracks, both entitled "Brimstone and Treacle" are so over the top they are kind of fun.  Okay, so they don't work out of the context of the play like so many of the classic songs do, but I like them.  The second time around is her showdown with Mary Poppins, and much of that is lost without the actual action on stage, but I would have been disappointed if they had left it out.

One thing I appreciate is that there is enough music here you can follow the story.  It helps that I had seen it first, but as I listen to the sound track again, bits and pieces of it come back to me.  Between the dialogue they include and the 25 tracks, you get a good chunk of the play.

So let's talk accents.  Despite the fact that this was recorded down under, I feel the characters sound British.  And those accents never get in the way of understanding the lyrics.  Bert's voice can sound nasally at times; I miss Dick Van Dyke's Bert, bad accent and all.

The CD comes with a think booklet with all the lyrics and spoken bits from the CD attributed to the correct character.  That's helpful on a couple of songs, although after a couple of listens it's easy to tell who is who.  There are also pictures of those songs from the stage on each page, which is a fun bonus.

While I will also love the songs from the original movie, this version of them is fun, too.  I'm glad to have Mary Poppins: The Original Live Cast Recording in my collection.