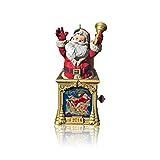 Stars: 5 out of 5
Pros: Beautiful details create a toy work of art
Cons: None
The Bottom Line:
Santa takes his time
Creating a special box
Stands out from the rest

I had hesitated about starting the Santa Certified series last year since I need another Hallmark ornament series to collect like I need more ornaments for my trees.  (Sarcasm aside, I do need more trees.  And the space to put them.  And the time to decorate them.)  However, I couldn’t pass up this collection of elaborate toys that Santa himself crafts.  I’m glad I started it because 2014’s second in the series is another winner.

This year, Santa has crafted a Jack-in-the-Box.  It’s a Christmas toy since Santa himself is the one who jumps out at the end.  Since the box doesn’t actually work, it’s captured in the open position with Santa popped out and a bell in his hand.  Of course, he’s got a smile on his face.  This is a classic Santa in red and a full white beard.  The details on him alone are great.  You can see the fur on his coat trim and the layers in his beard.  He’s even got holly on his hat.

However, the box is the real masterpiece.  Its default color is gold, and there are small golden trees on all the corners of the box.  Each side has a square picture in it of a Christmas or winter scene.  (Fun trivia, these pictures are taken from decades old Hallmark Christmas cards.)  If you turn the ornament around, you’ll see an ornate “SC” is on the top of the lid.

This ornament perfectly captures the idea behind the series of that special toy Santa puts lots of love and attention into.  The detail is outstanding (and I’m repeating myself) and it really is a work of art no matter which side you look at.

Santa takes great pride in these pieces, enough to sign them.  In this case, you’ll find Santa’s signature on the bottom of the box.  You’ll also find Hallmark’s series marker down there, however it, too, has been fancied up for this series.  I love that little extra detail.

As you’d expect with a Jack-in-the-Box, there’s a nice flat bottom so you can set it out anywhere.  However, the ornament just cries out to be hung from a tree.  The little loop is on the top of Santa’s head, and you’ll find it hangs perfectly straight.  What did you expect from something Santa put this much time and attention into?

The early pictures of this ornament made it look a bit garish, but the final result isn’t and no picture really does it justice.  Santa Certified #2 is a beautiful ornament you will proudly display for years.

And check out the rest of the Santa Certified series.