Music Review: That's Christmas to Me by Pentatonix 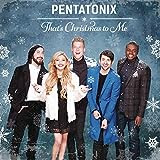 Stars: 5 out of 5
Pros: Beautiful a cappella arrangements of Christmas favorites with a few rarer tracks
Cons: There’s no need for Scrooge on this disc
The Bottom Line:
This fun Christmas disc
Is sure to be long time hit
Holiday spirit


This CD Quickly Became Christmas to Me

I’m going to start this review with a confession.  Despite how much I like a cappella music and enjoyed the show The Sing-Off, I’ve never seen a super big fan of Pentatonix.  Now, I’m not questioning just how insanely talented this quintet is.  It’s just their musical style isn’t my thing.  So when they released That's Christmas To Me last year, I almost didn’t buy it.  When the huge word of mouth convinced me to buy it, I didn’t pop it in to my CD player until just a few days before Christmas.

That was a huge mistake.

This CD is wonderful!  The harmonies are incredible, the music is fantastic.  You can’t listen to it and not get an immediate infusion of Christmas cheer.  I wished I started listening to it earlier in the year.  I pulled it out again before Thanksgiving this year, and I still love it.

The disc starts off with “Hark! The Herald Angels Sing,” and you might think from listening to it that this is a traditional version of the song.  The first verse is almost choral in nature and truly beautiful to hear.  But then they break down into more of their normal almost hip hop style.  But you know what, I still love it.  Despite the fact that I don’t normally love that kind of music, it’s fun here.

Although this is one of the only times they head in that direct.  Maybe that’s one reason I like this disc – many of the songs are fairly traditional, just with insane harmonies and other vocal fun.  It’s hard not to smile while listening to such favorites as “Sleigh Ride” and “It’s the Most Wonderful Time of the Year.”  They bring their power to an amazing version of “Mary, Did You Know?” and they close out the disc quietly with “Silent Night.”

Among the more unusual tracks is “Dance of the Sugar Plum Fairy.”  Yes, this is the music from the Nutcracker.  No, they haven’t added any words.  It’s just their voices recreating the music for us.  It’s a lush song that is a true pleasure to listen to.

Then there’s “White Winter Hymnal.”  Again, it’s beautiful, although I’m a bit stymied by the lyrics.  I’m not convinced they make much since, but it sounds so great.

The group even wrote the title track for this disc. “That’s Christmas to Me” invites you up to a warm fire as you think about all the great traditions we enjoy this time of year here in America.

But I’ve left one of the most fun for last, and that’s the mash up of “Winter Wonderland” with “Don’t Worry, Be Happy.”  This song includes special guest Tori Kelly helping with the lyrics.  They include all of “Winter Wonderland,” including the sometimes forgotten second verse, with bits of the melody of “Don’t Worry, Be Happy” bridging gaps in the first song.  They do sing some of the lyrics of the second song near the end, but not too many.  It’s different and definitely tons of fun.

And in the non-Christmas vein, there is a bonus track at the end as Pentatonix takes on “Let It Go” from Disney’s Frozen.  It’s a great cover, and any fan of the movie will enjoy having this as well.

So don’t be like me.  If you haven’t bought That's Christmas To Me, do so today.  It will quickly become a favorite you look forward to pulling out every Christmas.