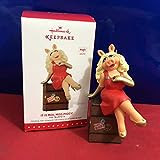 
A Diva to Ham It Up Your Tree (Yes, I Went There)

Sooner or later, it only made sense that Hallmark would do Miss Piggy for their unofficial Muppets series of ornaments.  They did just that in 2015 with It is Moi, Miss Piggy!, and it’s lots of fun.

Miss Piggy is clearly ready to take her act on the road.  She’s sitting on a traveling trunk that has a couple of stickers on it, one of which says “Paris or bust.”  She’s wearing a red dress and heals and has her left arm on her chest as if to say, “Are you people here to see moi?”

As much as I love the Muppets in general, these ornaments can be hit or miss.  This one is good, but it is a bit big and clunky looking.  I really don’t know how else to describe it.  I think if the ornament were smaller overall, it would come off better.  I think it’s because Miss Piggy is so large.

Of course, they might need the size for the magic portion of the ornament.  Like the others in the unofficial series, this one comes with several sound clips.  Install two button batteries in the ornament and press the button on the side to hear Miss Piggy say five different things.  That element always adds a fun touch to these ornaments.

Even though the trunk Miss Piggy is using as a stage is on its side, there’s still enough of a flat surface you can set this ornament out to be displayed year round.  After all, there isn’t anything particularly Christmassy about it.

Of you do want to hang it on your tree, you’ll find the hook in the top of Miss Piggy’s head.  Slip a loop through it, and you’ll find she tips to the front left corner a little, but not too badly.

If the size were a little better, I’d like this ornament more.  As it is, It is Moi, Miss Piggy! is fun if not perfect.