It's Friday, so that must mean it is time for Book Beginnings and Friday 56.

I'm taking a bit of a break from my usual cozy mysteries this week with some middle grade fantasy.  Specifically, The Timeless One, the fourth book in The Revenge of Magic series by James Riley. 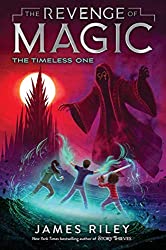 It's a bit of a challenge with this book.  I don't want to spoil this book, obviously, but I have to pick things that won't spoil the earlier books in the series either.

Of course, I don't have much choice what I take from the beginning of the book:

Fort Fitzgerald had traveled to other dimensions, flown with dragons, and fought off ancient horrors.  He'd saved the city of London from a boy under the spell of Spirit magic; he'd held the sword of King Arthur - one of the Aurthurs, at least - and made deals with the queen of the faeries.

One thing he'd never done, though, was raise a pet.

And I found a good quote from page 56 as well:

He blinked.  "Um, thank you.  I...I actually really appreciate that."

"You can owe me," she said, and grinned far too evilly for Fort's liking.

I'll be reviewing this book on Sunday, so I hope you'll come back to see what I thought.  In the mean time, have a great weekend.