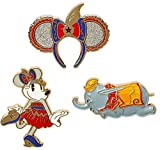 Stars: 4 out of 5
Pros: Another classic attraction visited with Minnie
Cons: Minnie’s gray, pins don’t tie together as well as they could
The Bottom Line:
This high soaring ride
Is Minnie’s next attraction
Good, not favorite

Minnie’s Flying as She Visits Dumbo

Dumbo the Flying Elephant is one of those iconic Disneyland attractions.  It’s probably one reason why the lines for the attraction are always so long – longer than the similar attractions in the park.  So it makes sense that Minnie would visit it as part of her journey during the Minnie Mouse the Main Attraction series.

This is the conclusion of Minnie’s time in Fantasyland.  She’s just come from a ride of King Arthur’s Carousel, and now she’s visiting a similar attraction.  From here, she’s go…well, I don’t want to spoil it, but it is outside of Fantasyland.

Of the many things that Disney released for this year long series, I’m just collection the pin sets.  The first set is the icon for the ride, and this time it’s Dumbo.  It very much looks like the Dumbo we ride on in the attraction.  We see him from the side, and he is clearly flying.  He’s mostly gray, but he’s got a red collar and a yellow hat and cape.  Next up with Minnie herself.  In honor of the ride, she’s wearing red and blue – circus colors.  She’s got a feather in her bow.  And she’s a shade of gray instead of her traditional black coloring.  Finally comes a set of Minnie ears.  The ears themselves are a glittery gray with a red and yellow fringe.  In the middle is a red and blue bow with a magic feather coming out of the middle.

While I still enjoy this set, it’s not quite as strong as some of the others in the series for me.  The yellow on Dumbo doesn’t quite tie him in to the rest of the pins.  I think blue would have helped there.  And when Minnie isn’t her traditional black and white, she doesn’t look quite right to me either.  Still, overall, I do like these pins.  The Minnie ears pin especially looks wonderful.

Once again, the items from this series have gone fast, so if you are interested, you’ll have to save up for them or be patient (or both).

I’m enjoying this journey with Minnie because I enjoy seeing how she changes to match each attraction.  While her visit to Dumbo might not be my favorite, it is still a good addition to this series.