It's Friday!  Starting off the day with Book Beginning and Friday 56. 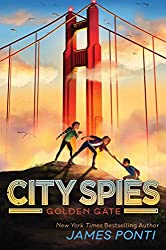 This is the second in the City Spies middle grade series.  I loved the first one last year, and this one was just as good.

Here's how it begins:

It was just after dawn, so the black-clad hijackers were barely visible as they moved with military precision across the deck of the marine research vessel Sylvia Earle.

It wasn't that Sydney wanted to be unhelpful.  It was just that, according to the United Kingdom Official Secrets Act, she was forbidden from disclosing her MI6 status to anyone.  So the lies continued.

I'll be reviewing this book on Sunday so I hope you come back then for my full review.  In the meantime, have a great weekend.