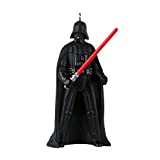 Stars: 5 out of 5
Pros: Great miniature Vader
Cons: All cons banished to the dark side
The Bottom Line:
Mini Darth Vader
Turns into great ornament
This fan is happy

The Dark Side Has Shrunk

If you are familiar with Star Wars, you’ll definitely recognize the ornament.  It is black, as is appropriate for the character.  His cape is behind him.  The electronics that are keeping him alive are clear on his chest.  His helmet is firmly on his face.  And he has his red light saber out in front of him.

Considering the ornament is only about an inch and a half tall (I mentioned this was a mini ornament, remember), the amount of detail is pretty impressive.  It would be easy for the ornament to look like a black blob, but any fan will recognize him in a heartbeat.  I love that about these mini ornaments.

Between his legs and his cape, this ornament actually does stand on its own, which is always hit or miss with the mini ornaments.  He’s pretty solid, too.  Because of his size, I would recommend you put him in a spot where he won’t get easily lost.

I also want to issue a warning about the lightsaber.  Yes, it’s plastic like the rest of the ornament, but I feel like it would be easily broken if he lands wrong or you aren’t careful packing him away.  Hopefully, I’m just being paranoid.

When you go to hang him on your tree, you’ll find he hangs mostly straight.  He does tip forward ever so slightly, but you have to be looking for it to notice.

This ornament paired wonderfully with the Luke Skywalker ornament also released in 2020.  I got and enjoyed both of them this past Christmas.

I’m not sure if we will get other Star Wars characters in mini again going forward (I think they’ve done the droids at a minimum in the past), but I’m happy with Darth Vader.  I like having eclectic ornaments on my trees, so it makes me happy seeing my miniature trees going that direction as well.