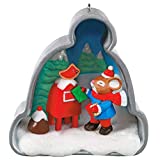 Stars: 4 out of 5
Pros: Cute scene inside a Santa’s hat frame
Cons: The bird is odd; slight tilt
The Bottom Line:
Mailing a letter
Creates a cut cutter scene
Inside a hat frame

What Do Mice Ask Santa For?

Cookie Cutter Christmas remains one of my favorite Hallmark ornament series.  (I know I say that quite a bit, but I really mean it.)  The scenes are so cute, and the cookie cutter frames are perfect for the scenes inside.  2020’s addition to the series was no exception.

The cookie cutter this year is a Santa hat.  Now, I’ll admit, it took a discussion with other fans of the series for me to see it.  But as soon as someone said it, I couldn’t believe I missed it.  I probably didn’t get it because it’s not a cookie cutter shape I normally think about or see.

And it goes perfectly with the scene inside.  Our mouse friend who is the star of the series is mailing his letter to Santa for the year.  I’m sure there is lots of cheese on his list, but I wonder what else he is asking for?  Anyway, he’s about to put a green envelop in the red mailbox.  He’s got another envelope, red, in his other hand.  He’s bundled up for the weather.  There’s a bush sitting next to the mailbox, and there’s a bird sitting on top of the mailbox.  In the background, you can see some trees with snow on them.  You can even see his footprints in the snow in the foreground of the scene.

I need to talk about that bird for a moment.  I know that sometimes, the scene inside the cookie cutter includes things made out of candy, which is a fun touch I love.  In this case, that bird is thin and looks like a cookie of a bird stuck in the snow on top of the mailbox.  The result is…weird.  I just don’t get what they were going for, especially since there aren’t other candy or sweets inspired items in the scene.  Okay, so the bush is obviously some candy, but it’s small and it fits in.  But the bird?  They would have been better off leaving it out or making it a more realistic looking bird.

That issue aside, I do like this ornament.  It’s a cute scene, and the choice of the Santa hat frame is perfect for the scene inside.

The ornament has a flat base, which is nice if you want to set it out to display.

The 9 in a Christmas tree series symbol is located on the back along with the handle.  This is a cookie cutter, after all.  I love that they include those types of details.

The ornament does tip slightly to the left front, but it isn’t a bad tilt.  You can easily hide it with the branches of your Christmas tree if you so desire.

Cute has always defined the Cookie Cutter Christmas series, and this ornament is no exception.  It’s a fun addition to my trees.

Check out the rest of the Cookie Cutter Christmas series.