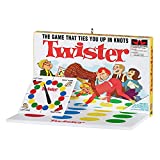 Don’t Let This Ornament Twist You Up in Knots

When you collect an ornament series, you know that not every ornament is going to be perfect for you.  Some people choose to skip those ornaments.  I envy them.  Being the collector I am, I buy them anyway.  It’s why I bought this year’s addition to the Family Game Night series – Twister.  Not that I’m really complaining.

You see, I never had Twister growing up.  And I think I only played it once or twice as a kid.  As a result, it wouldn’t have been one of the first games I would have chosen to have included, but I’m still enjoying it.

The ornament is a bit simpler than some of the others in the series, but it is a simple game.  As usual, we’ve got the “game board,” in this case the matt you play on, coming out of a classic box for the game.  And I do mean classic.  Many of the game boards in this series have featured the 1980’s boxes, which has been perfect for my nostalgia since that’s when I was growing up.  This one is going back to the original 1966 cover.  The only other thing in the ornament is the spinner, which is leaving up against the box.

As always, we’ve got a nice flat base, so you can set this ornament out to display if you wish.  When you go to hang it, you’ll find it does tip forward a little bit, but you should be able to disguise that with some tree branches.  You’ll find the series marker, an 8 in a Christmas tree, on the bottom of the ornament.

Those who have fond memories of Twister will enjoy this ornament.  Even someone like me who enjoys nostalgic games for their own sake will appreciate this addition to the series.

Looking for more fun?  Here are the rest of the Family Game Night Ornaments.