It's another Friday, so that much mean it is time for Book Beginnings and Friday 56.

This week, I'm featuring Mrs. Clause and the Halloween Homicide by Liz Ireland. 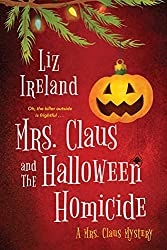 This is the second in her Mrs. Claus series.  And yes, it is indeed set at the North Pole and features Mrs. Claus as the sleuth.  It's as delightful as it sounds.  Not that it isn't without the mystery and mayhem you'd expect from a mystery, as you can tell from both of these short quotes.

It jumps right in with this opening;

"It was a slaughter," Salty the elf said.

Meanwhile, page 56 was a little hard to pick something that wasn't too spoilery, but I did find this nice teaser.

I'd find the idea that it is over comforting is that weren't page 56.  Something tells me the nightmare is only going to get worse.

I'm pretty early with this book since it will be released on September 28th.  And I'll be back with my review of the book this coming Monday, so I hope you'll stop back by and see why I loved it.