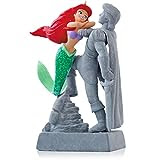 Stars: 5 out of 5
Pros: Impressive sculpt and great song clip
Cons: Song didn’t come from scene, but who cares?
The Bottom Line:
Anniversary
Marked with great song/scene combo
Make part of your world


For Her 25th Anniversary, Make Ariel Part of Your Tree

The ornament is based on the iconic scene where Flounder (who is not in the ornament) has presented Ariel with the statue of Prince Eric.  The statue is attached to its base, and is a heroic pose of Eric looking out over his kingdom with one foot on a stone.  Ariel has swum up to it and is perched so that her arms are resting on Eric’s arm.  The result is that the two of them are eye to eye, and Ariel is looking into the eyes of the statue with a love sick look.

Now, as a DisNerd, I do have to note that the song used in the ornament actually comes before this scene in the movie.  But you know what?  I don’t care.  Yes, the song is the iconic “Part of Your World.”  The ornament takes three button batteries in the base.  When they are installed, just press the button to hear a clip of the song from the movie.  The clip runs almost 45 seconds and is from near the beginning of the song.  Any fan of the movie will recognize it and love it in a heartbeat.  It fades out a tad too early, but that’s my only complaint with it.

And what a perfect duo the song and the sculpt really make, too.  I love the fact that Ariel isn’t connected to the ground since she swam so much in that part of the movie.  I love that song.  The combination of the two is just wonderful.  Yes, the song came before the two even met, but as I said, I truly don’t care.  It makes me smile when I press the button, and that’s all that matters.

With the base of the ornament being the base of the statue, the ornament stands perfectly well on its own two feet (sorry, reference to the sound clip, couldn’t resist).  And since this isn’t really a Christmassy scene, you can display it anywhere you want year round.  Of course, Ariel is mainly red and green, so that does make it more Christmassy than many of the Disney ornaments Hallmark releases, right?  And I should mentioned that Ariel’s bottom half is covered with glitter to add to the Christmas feel.

The loop for hanging the ornament is on the top of Ariel’s head.  Despite efforts to make the ornament balanced, it does tip very slightly to the right.  It’s not enough to ruin the ornament in any meaningful way, and once you get it in the tree, you’ll never notice.

While not all of Disney’s animated films that have come out in the last 25 years have been good, I’m quite thankful for the many films we have enjoyed during that time.  So it is very fitting to honor The Little Mermaid on its 25th anniversary.  I can’t think of a better way for ornament collectors to do that than this ornament.