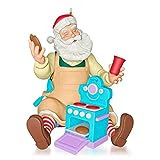 Stars: 5 out of 5
Pros: Santa testing an oven with delicious cookies
Cons: Slight tip, one seam could be a little better.
The Bottom Line:
Delicious testing
Must make sure the oven works
Has some fun details

One complaint I have heard from fans of Hallmark’s Toymaker Santa series is that the selection of toys has highly favored the boys.  I can’t disagree.  While there have been a few gender neutral toys, there’s only been one that catered specifically to girls.  Until now.  For the 2014 entry, Santa is testing out an Easy Bake Oven (or an off brand oven).  While it doesn’t grab me as much as some of the earlier ones (for obvious reasons), I do still like it.

Santa is sitting on the floor with his legs out in front of him.  In between his legs is the oven itself.  Now, I never had one and never played with one as a kid, so I don’t know much about how it is supposed to look.  But I find the one in this ornament cute.  It’s blue, and around the nob on the top is a painted on smile.  There are two red burners on top, four nobs, the oven door is open, and a sheet with a cookie is coming out of the oven.  Santa’s got another cookie in his right hand and a glass of milk in the left.  And a small detail I love?  Instead of a hammer in loop of his apron like every other ornament in the series, he’s got a blue spatula that is a match for the oven.  How perfect is that?

Okay, even this guy with no connection to the oven can’t help but appreciate this ornament.  Why is that?  Santa’s testing out an oven, and he’s making cookies to do it.  Could anything be more perfect?  I mean, you’ve got to bake something, right?  And in this case, he’s making his favorite snack.  The tie in to the snack you left out for Santa on Christmas Eve as a kid are universal even if this ornament will appeal mostly to girls.

Before we move on, I do want to make clear that, while this isn’t my favorite in the series, I do still like it and appreciate it.  I’m just a guy, so the appeal of the toy isn’t as strong as some of the others.  Still, I’m glad to see them doing a toy that will appeal most to girls.  I’m racking my brain trying to come up with more they might do in fact, but I’m drawing a blank.  Then again, I can’t think of too many toys they haven’t done yet, so I’ll sure I’ll be surprised in the future.

Because Santa is sitting with the oven in front of him, there’s enough of a flat bottom that the ornament will sit out on any level surface no problem.  And with this being the fifteenth in the series, you’ll also find a 15 in a Christmas tree on the bottom of the ornament.

As if usual in the series, the loop for hanging Santa is on the top of his usual hat.  He tips slightly to the right.  It’s not too bad, and if you aren’t paying attention, you’ll probably miss it.

However, harder to miss is the seam on Santa’s right leg.  It’s actually over on the side, and it looks a little worse than the one on his left.  I’ve definitely seen worse, but it’s still disappointing.

Overall, this is a winner, however.  Any woman or girl who dreamed of an Easy Bake Oven will love this year’s Toymaker Santa ornament.  Even I’ve found details I love about it and am glad to add it to my collection.