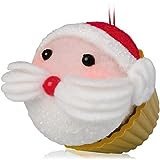 If you are decorating cupcakes for Christmas, sooner or later, you’ll wind up making a Santa cupcake, right?  That is certainly the case for Hallmark’s Christmas Cupcake series.  In fact, in some ways, I’m surprised it took until the fifth entry to create Sweet St. Nick.

The cupcake has a plastic base that looks like a gold cupcake foil.  Peeking out of the foil is a vanilla cupcake.  But the decoration is up on top, and that part is made to look like Santa.  You’ve got red frosting for a hat and white frosting around his face for his beard and mustache.  There are even dots of black for his eyes and a red nose.  With the vanilla cupcake acting as his skin color, you’ve got a decent looking Santa.  Add in big pieces of glitter pretending to be powered sugar, and you’ve got a delicious looking cupcake.

Now, I say frosting, but of course the truth is this ornament isn’t made of frosting.  (If it were, it wouldn’t last five seconds.)  In reality, the “frosting” is fabric, as is the cupcake in the plastic cupcake holder.  This adds a multilayered look to the ornament that actually looks more like frosting than plastic could ever achieve.

If you pick up this ornament looking for an exact replica of Santa, you will be disappointed, but it very much looks like a Santa made of frosting on a cupcake.  And since that’s what the ornament is supposed to be, I love it.  It’s cute and a perfect addition to the series.

As always, the cupcake has a flat base, so you can display it any way you want.  If you’ve been collecting the series, you could easily set them in a pan or an actual cupcake display stand, for example.  The series marker, in this case a 5 in a Christmas tree, is on the bottom of the cupcake as well.

There are several series where the creativity continues to amaze me, and this is another one.  Sweet St. Nick is a fun and festive cupcake to add to your Christmas tree today.

Be sure to check out the rest of the Christmas Cupcakes series.