Would you look at that?  We made it to the weekend again!  Time to celebrate with Book Beginning and Friday 56. 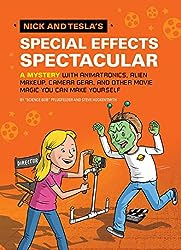 This is the latest in a middle grade mystery series I enjoy that includes some great science experiments.  Okay, so I've never done any of the experiments or projects, but I've also rarely cooked any of the recipes in the culinary cozies I read.

There was a muffled boom, and then the whole house seemed to rise about half an inch before slamming down again.  The lights flickered but stayed on.


Since I read this via an e-ARC, I'm going to approximate the 56% point in the book (the ARC file had two copies of the book in it).  So, using my best guess, I found this:

"It's a deal, she says.  Haven't you ever heard of negotiating?"
"We don't have time to negotiate,"
"That's easy for you to say.  You're not the one who just agreed to do all of you sisters' chores for the next six months!"


This is now the fifth in the series, and another book I enjoyed.  My only complaint is that Mark Carstairs (a character from the previous book), didn't show up again here.  (Not that I expected him to show up again.)
Posted by Mark Baker at 4:24 AM