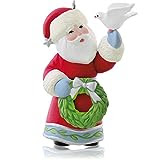 Stars: 5 out of 5
Pros: Cute final visit between Santa and an animal friend
Cons: For series fans, it’s the final one
The Bottom Line:
Santa and a dove
Cute way to end this series
For animal fans


Our Visits with Santa Come to a Peaceful End

At some point over the last few years, it dawned on me that Hallmark had three very similar series going.  There’s the long running and popular Frosty Friends series, Snow Buddies, and A Visit from Santa.  All three featured animals, the only difference being who is visiting the animal.  Obviously, having three similar series didn’t work, and so in 2014, Hallmark ended the newest, A Visit From Santa, at six.  The series went out with another great visit, however.

For his final animal visit, Santa is visiting with a dove.  He’s holding his left hand up, and the dove is resting on it with her wings up in the air.  In his right hand, Santa is holding a wreath.  He’s dressed mostly in a traditional red hat and red coat, but his coat has a fringe.  It’s changed in every ornament in the series, but this time, it’s a light blue fringe that matches his gloves and contains a leaf pattern in it.

This series has always been cute, and this ornament is no exception.  Santa and the dove are looking at each other, and that just makes me like it more.  It was the cuteness of the series that made me start it to begin with, and that continued right though until the end.  Plus I like the fact that a dove symbolizes peace and peace on Earth is a Christmas greetings.

The loop for hanging Santa is on the top of the ornament.  (That just sounds bad, doesn’t it?  Hanging Santa?  Yikes!)  The ornament tips forward ever so slightly when you hang it, but it’s barely noticable.

I must admit I have mixed feelings about this series ending.  I have so many Hallmark ornaments that it is getting a little overwhelming.  This series was one I wasn’t super attached to.  On the other hand, I do think the ornaments in the series are so cute.  I guess it’s a good thing I don’t have to decide, isn’t it?

If you’ve been collecting this series, you’ll definitely want to get the final A Visit From Santa to complete your collection.  It’s a great last note for this cute series.

Be sure to check out the rest of the Visits from Santa.