We made it to Friday!!  That means it is time for this week's Book Beginnings and Friday 56.

This week's book is The Buccaneers' Code by Caroline Carlson, the third (and unfortunately final) book in The Very Nearly Honorable League of Pirates middle grade series.  I've read just over half of it today, and I'm reminded why I loved the first two so much.  Great humor, wonderful premise (pirates, magic, villainy), lovable characters.

But I should save that for my review, shouldn't I? 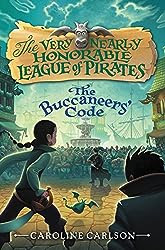 How about we get to some quotes.  Here's how the book begins:

It was snowing hard in Queensport, and Hilary thought it might never stop.  Snow covered the grounds of Westfield House, drifting against the drawing room's tall glass doors and blocking out every last glimpse of the harbor beyond.  When Hilary swung her sword through the air in the figure she'd been practicing all morning, her blade lodged itself once again in the folds of her mother's best velvet drapes, and she felt tempted to leave it there until spring.  "This weather," she said, "is entirely unsuitable for piracy."


Between the chapters, we get letters between the characters or articles from various newspapers and gossip sources.  Why do I bring this up?  Because page 56 is a letter that Hilary's friend Claire is writing to Hilary.  And it gives us this:

I'm afraid I've been making quite a hash of even the simplest enchantments; instead of lifting Miss Pimm's hat off her head, I somehow managed to lift the entire top of the carriage.  The coachman seemed awfully displeased.


Yes, both are longer than I normally share, but it felt right to give you a taste of this book.
Posted by Mark Baker at 12:01 AM