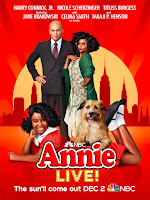 Stars: 4 out of 5
Pros: It’s Annie, so I love it
Cons: Taraji P. Henson’s over the top performance among other nitpits
The Bottom Line:
Annie gets filmed live
A mostly good production
Pleased musical fan

Mix of Stage and Screen in Annie Live!

While I’ve been faithfully watching each of NBC’s live musicals since they started, I was especially thrilled when they announced they were going to be doing Annie this year.  Yes, I love the musical.  Yes, I know it is sappy and predictable and all those things.  I don’t care.  It is fun, so I sat down looking forward to seeing how this live adaptation would go.

If you aren’t familiar with the musical, it follows Little Orphan Annie (Celina Smith) who is living in an orphanage in New York City in the 1930’s.  When she was left under the care of Miss Hannigan (Taraji P. Henson), she was left with a note from her parents saying they would be back for her.  And she clings to that hope.  Her life changes significantly when billionaire Oliver Warbucks (Harry Connick, Jr.) decides to ask for an orphan to spend the holidays with him.  What will happen next?

This production is not going to change your opinion of the musical at all.  If you love the musical, you’ll find much to enjoy here.  If you don’t like it, you will still hate it.  I’m not going to get into any of that but focus on how this particular production approached the story.

I was highly impressed with the choreography.  It was a step up from what I’m used to seeing in these musicals.  Everyone, including the actresses playing the rest of the orphans, were so talented.  Likewise, the singing was wonderful.

I’m a huge fan of the stage version and the 1999 film.  I’m not a fan of the 1982 film, and I’ve only seen it a couple of times.  In the past, these productions on NBC have been live productions of the stage version (on specially built stages in a studio), so I was surprised to find some of the songs from the 1982 production made it into this version.  I’m not sure what the thinking was.  The cast did fine with them, but I’m not a fan of those songs, so I would have been happy if they had just stuck to the play.  I’m especially disappointed that they included the duet between Miss Hannigan and Warbucks, but it was infinitely better here than in the original movie.

The 1999 version tried to leave the 1930’s setting behind, but this production played into that, including the Hooverville scene and song and keeping President Roosevelt’s appearances in the second act.

The cast was good.  Celina Smith was fantastic as Annie.  She was earnest and believable, walking the fine like of making Annie optimistic and precocious without being too sweet.  Her singing voice was outstanding as well.  It was truly a joy to watch her.  Most of the rest were just as good, but she really stood out to me.  On the other hand, there was Taraji P. Henson’s Miss Hannigan.  It’s a hard part to nail, and I felt she went too far over the top, making the character a borderline cartoon.  Based on the costume, I’m sure it was a directorial choice, but it still distracted.

I noticed some of the lines of dialogue were changed or edited from the play as well.  While I get it, this is a new production and they can do whatever they want, in this case, it took out some jokes and setup that I always enjoy.  They also changed the ending slightly.  I can get what they were going for, but I’m still looking to see the play’s ending finally filmed.

The production itself was fantastic from a technical standpoint.  Yes, at times, it is weird to see the audience or see the characters walking between sets, I also found it fun for something different.  Then again, I do love going to plays, where that kind of thing is much more common, so I am more easily able to accept that.

Most of what I’ve point out fall into the nitpick category for me.  Overall, I enjoy Annie Live!  If you are looking for a new production of this beloved musical, you’ll enjoy it as well.