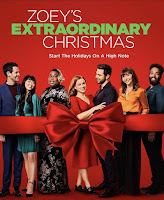 Stars: 4 out of 5
Pros: Does a great job of wrapping up the show
Cons: Pacing in the middle lagged
The Bottom Line:
Wrapping up a show
Last bit of singing, dancing
Fans will be happy

Not Quite Extraordinary, but Fans Will Appreciate

When Zoey’s Extraordinary Playlist was cancelled earlier this year, I wasn’t too surprised, but I was certainly disappointed, especially with the twist they gave us at the end of the season finale.  So, I was one of the many fans thrilled when the Roku Channel stepped up to give us Zoey’s Extraordinary Christmas to wrap things up.

It’s been eight months since Zoey (Jane Levy) and the rest of her family lost her father (Peter Gallager).  Since Mitch was always the one creating the Christmas memories everyone looks back on fondly, no one is quite sure what to do with this Christmas.  After talk about everyone doing their own thing, Zoey takes it on herself to create the perfect Christmas just like her dad always did.  Meanwhile, Mo (Alex Newell) gets in over his head when he begins “helping” with a neighborhood Christmas show.

Fans of the show need not worry that I’ve just mentioned a handful of characters.  The entire main cast is back as are several key guest stars.  Honestly, if you didn’t know this was produced after the show was cancelled before you sat down to watch it, you’d never know.  The story, the cast, the sets, it all feels like another episode.  A two-hour episode, but that’s the only change.

Which means the show is bittersweet, but that was the show itself.  I do feel like this one got a bit more maudlin than the show often did.  Most episodes usually had the main plot, the sub-plot, and often even a second sub-plot.  Here, we really only get the two storylines I mentioned.  Yes, there are a few other things, but they are mentioned in passing as Zoey gets updates on them.  They mostly happen off screen.  Between waiting for Mo to self-destruct and Zoey to finally face up to what she is feeling, this lost some of the fun the series usually had in the middle.  It could have used a stronger third plot since the middle was a bit slow as well.

But the ending.  Stay with it and trust me on this – the ending is worth it.  It wraps up the storylines of the show wonderfully.  There has been talk from Roku about possibly trying to do more depending on how this movie did.  If that happens, I will most definitely turn in.  But if it doesn’t, we leave the characters in a good place.  I cried at part of the movie, but I was smiling when it was over, which describes my reaction to many of the episodes.

If you aren’t familiar with the show, everything you need to know is summarized in the first few minutes in a fun way that entertained this fan as well.  One thing you do need to know is that that show is a musical.  Once again, the musical numbers shine.  I was surprised at how many of the musical numbers weren’t Christmas related, but it does make sense given the premise of the show.  That’s a very minor complaint, however.  I enjoyed them all.  The cast can sing, and the choreography is often fun.  Jane Levy got to sing more here than in the show, which is always a plus.

And the acting is great, which is no surprise.  The actors obviously love these characters, and they were enjoying revisiting them as much as we were.