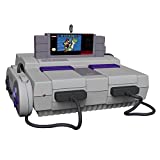 Stars: 4 out of 5
Pros: Perfectly captures the Super NES with sight and sound
Cons: Does tip a little
The Bottom Line:
The 90’s console
Becomes ornament with sound
Brings back memories

If you are familiar with the game console from the 1990’s, you know exactly what this ornament looks like.  It’s a gray box.  I know, that doesn’t sound too exciting, but that is pretty much what the game system looked like.  It’s not a complete box, and it’s got some purple buttons on the top as well.  Sticking out of the top of the ornament is a Super Mario World cartridge.  The two controllers are attached, one on top and one to the side.

Also like last year’s ornament, this one is a magic ornament.  It runs on three button batteries.  To get it to play, you push the power button on top of the console.  (What else would you hit?)  When you do that, the red light comes on just like on the console, and you hear music and sound effects from the Super Mario World game.  All told, this lasts about 30 seconds.

I bought a Super Nintendo just about the time they were phasing them out.  I’ll admit, I didn’t play Super Mario World too much, but I played it enough to recognize the sounds the ornament makes.  I was more of a Tetris Attack player, to be honest.  Even so, I knew I had to get this ornament as soon as I saw it.  I spent many happy hours playing games on the console, so I wanted it in my collection.

Like the original console, the ornament has a nice flat base, so you can easily set it out to be displayed anywhere you’d like.  The ornament does hang a little to the front and left.  It makes sense that it would hang to the front a little given where the loop is, but I’m a little surprised it hangs to the left.  Maybe it’s the controller on the side?

I don’t play many video games any more, and haven’t turn on my Super NES in years.  But getting this ornament makes me want to turn it one for a few rounds of some of the games I’ve got for that system.  Which means, it is working perfectly as a nostalgic ornament.

If you also remember playing video games on the Super NES, you’ll be thrilled to add this ornament to your collection.