It's Friday the 13th!  But I'm still considering it a good day because it is a Friday.  And I'm kicking it off with Book Beginnings and Friday 56.

Usually, I try to pick one of the books I'm reviewing the following week when I participate, but I had a real struggle this week.  I'm reviewing three books next week, and all three of them had strong openings.  So I let the 56 decide which one I would choose.

And the winner of this contest?  With Vics You Get Eggroll by Diane Vallere. 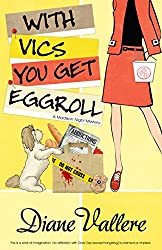 No, I'm not going to skip ahead of the 56.  I'm starting with the opening:

The flashing red and blue lights remained visible in my rearview mirror far longer than I would have liked.  I accelerated through the twists and turns of Gaston Avenue's residential streets, almost lost control and swing wide when the road cut to the right, but kept going.  If the police officer behind me wanted to catch up with my zippy Alfa Romeo, he was going to have to put pedal to the metal.

That really caught my attention.  I mean, this is the third book in the series, and we are starting with the main character on the run from the cops?  I had to read more.

And now we get to the exchange from page 56:

"Do you want to talk about this things that's going on with you?" I asked.
"Not much to tell.  Not yet, anyway."
"I saw the news."
"That's only half of the story."
"If I thought it was the whole story, I wouldn't have gotten into your car."

Whose car?  What is going on with them?  Is the main character really safe?

My review of this book won't be up until NEXT Friday.  But trust me, it's a great book, so if you want to get it now, go right ahead.

Have a wonderful weekend.