Music Review: Unto Us by Aaron Shust 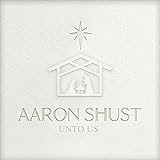 Stars: 5 out of 5
Pros: Christ focused Christmas music that is highly original and fun
Cons: I will get strange looks listening to it year round.
The Bottom Line:
Orchestra and choir
Aaron’s Christmas offering
Original, fun

Every so often, I think that I have too much Christmas music (which I do), and maybe I shouldn’t buy any more.  I’m glad I don’t listen to that part of my brain, however.  When artists I normally enjoy release new Christmas music, I automatically buy it.  This year, Aaron Shust is one of those artists, and I am thrilled to add Unto Us to my Christmas rotation.

Since Aaron has always leaned toward the praise and worship side of the spectrum, it’s not real surprise to me that he chose to go the route he did for this release.  It’s a full on orchestra/choral disc (at least most of the time).  While not my first choice of discs to buy, I was on board with this choice by the end of my first time through the disc.  It’s beautiful.

The disc opens with “Star of Wonder” which is an almost completely instrumental overture.  You’ll hear bits of familiar carols as it progresses, most noticeably “We Three Kings.”  The orchestra is already in fine form here as they play.  When the choir comes in, we are treated to “Angels from the Realms of Glory.”

That’s another thing I like here.  While most of the music is original, the familiar carols we get are not your typical carols.  Near the end of the disc, there’s a fun version of “Good Christian Men Rejoice,” and Aaron has added his own chorus to the song.  The disc closes with his pop/soft rock take on “Go Tell It on the Mountain” which lifts a song I normally don’t like and makes me enjoy it.  Probably the most familiar song here is “O Little Town of Bethlehem,” but even that gets tweaked with a new melody written by Aaron.

But many of the tracks are new songs.  One of my favorites is the title track, which presents us with a fun upbeat and catchy melody and words of proclamation who Jesus is that come mainly from Isaiah.  After a couple of listens, you will have this song stuck in your head, and you’ll enjoy every second of it.

Another fun track is “God Has Come to Earth.”  This song proclaiming who Jesus is and his coming to Earth is another upbeat track I find myself singing if “Unto Us” isn’t stuck in my head.

Now, I’ve jumped around talking about the songs, but there is a discernable order to the disc.  The first half are declaration of who Jesus is, bringing to mind the prophets and the angels as they proclaimed Jesus’s birth.  Then we switch to the adoration of the shepherds for the next three tracks, including the instrumental “Keep Silent.”  The simple lyrics of “Sanctuary” are extremely haunting as well.  And wait until you hear the boys’ choir and the young soloist on that one.  Finally, the last two tracks are the shepherds proclaiming what they’ve seen to anyone who they meet along the way.

I often judge a disc by how quickly it feels like Christmas to me.  This is a hard one to judge because it doesn’t have as many traditional carols (which I like), and with orchestra doesn’t grab me as much as some of the jazzier discs I have do.  However, it feels like a church choir program, which does make it feel like Christmas to me.  I could easily see myself sitting through a performance of this and loving every second of it.

While many Christmas discs can start to sound the same after a while, with the beautiful orchestra and the many original tracks, Unto Us will definitely stand out from the rest.  It might take you a few listens to fully feel like Christmas, but you’ll appreciate it right away.