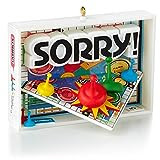 Stars: 5 out of 5
Pros: 3D box art makes for a fun looking ornament
Cons: Dice on the ornament because they are now part of the game
The Bottom Line:
Game night memories
Of being sent back to start
Fun for family tree

In case you haven’t noticed, I collect a lot of Hallmark’s ornament series.  And every year, I state I will not start any new ones no matter how cute they are.  And every year I wind up breaking that promise by starting several new ones.  This year, I only started their new Family Game Night series.  With Sorry! being the first one, I just could not resist.

The ornament’s basic shape is a rectangle, which makes sense because it is a take on the cover of the board game.  The design looks like the cover of the box as well with SORRY! written in big letters across the top and the picture from the cover across it.  But here’s where it gets fun.  The picture portion is actually in 3D, and the corner of the game board comes out toward you.  The pieces on the board are also in 3D, attached to the board.  That makes it much more fun than just being a picture of the game board cover.  This includes two game pieces knocking into each other with red sending a green game piece back to the start.  (Bummer since I liked to be green).

Actually, the entire front is recessed, so as you look at the ornament, you’ll see that the SORRY! across the top is actually 3D as well.  This also creates a shelf under the game board, and on it you’ll find more game pieces, some of the cards, and dice.

Yes, you read that correctly – dice.  When I first saw the ornament, I thought this was a detail that Hallmark had gotten wrong.  With Sorry!, you always flip over cards to tell you how many spaces to move and any other special options – or at least that’s how the version I played growing up was designed.  Apparently, the newer version of the game includes dice.  I don’t know what you use them for, but that is why that are included in the ornament.  It’s the only detail I didn’t like, but if it is how the game is played now, it does belong on the ornament.

The ornament does have a nice flat back (with cover art from the an older Sorry! box painted on it).  However, if you set the box on that, the game board will stick up in the air.  You can try setting this ornament up on the narrower side so the game pieces comes out like it should.  Even though this side of the ornament is fairly narrow, it actually is fairly steady if you want to display it this way.

Still, I recommend hanging the ornament from the little ring attached to the top of the box.  It’s right in the middle of the box, so the ornament hangs straight, which isn’t a surprise at all.  I mean, with all that space on top, they should have been able to make sure it balanced correctly.

Looking for the series marker.  It’s not hidden on the back of the ornament like I thought it would be.  Instead, it was in the second place I looked.  I’ll leave it to you to find it, but I thought the location was lots of fun.

I loved this game growing up because the cards made it something different.  And I love the idea of hanging games on a Christmas tree.  Since you think of toys and games at Christmas, this makes lots of sense as a Christmas decoration, right?  Between that and the many hours my family spent playing games while I was growing up, I just couldn’t resist the series, and I was thrilled with this game being the one they started with.  If they had just painted a rectangle to look like the game box, that would have been boring, but the 3D game art with the extra pieces and cards below it makes this a winning ornament.

So I will never be Sorry! I broke my pledge and started a new series in 2014.  Family Game Night is already off to a great start and promises many more years of reliving great memories playing games to come.