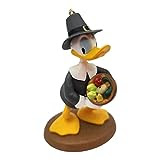 Stars: 4 out of 5
Pros: Donald goes against type and looks good doing it.
Cons: Noticeable tip to the front and right
The Bottom Line:
Donald is thankful
That he’s great for November
Even with a tip

Thankful is not the first word I think of when I think of Donald Duck.  In fact, angry is usually how I would describe him, the exact opposite.  And yet he makes his first appearance in the Year of Disney Magic series in Thankful Donald.

As you might expect, Donald is dressed a pilgrim in a gray vest and hat.  He’s holding a cornucopia filled with fruits and vegetables.  While he’s not exactly smiling, he does look happy.  He’s standing on a brown ovalish circle that makes me think he’s standing outside.

Now I do have to wonder just what about this pose makes Donald thankful.  I think Pilgrim Donald might have been a better name for this ornament.  But I’m being nitpicky here.  He definitely looks good in his Pilgrim costume and the horn of plenty adds a nice touch for this Thanksgiving offering.  With those details, there’s no mistaking what month he represents either; the ornament just screams November.

Which is saying something considering I don’t consider Donald a generally thankful person.  True, in his shorts, he’s rarely out picking a fight, but he is the first to strike back if attacked.  That’s not the attitude I see displayed here, however.  I choose to see it as Donald turning over a new leaf, and one I fully support.

Thanks to the oval of dirt Donald is standing on, there’s a nice flat base.  You can use that to set this ornament on any surface to add to your Thanksgiving decorations in November.  You’ll also find the 4 in a Christmas tree series marker on the bottom of the stand.

Unfortunately, this is the first in the series that doesn’t hang straight.  When you slip a hook through the loop at the top of Donald’s hat, you’ll find that he tips forward and to the right.  It’s just enough to be truly noticeable, especially because of the flat base to the ornament.

That tip is the only thing that detracts from this ornament, however.  If you are a Disney fan, you’ll be thankful to add Thankful Donald to your collection.