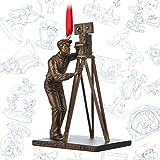 Stars: 4 out of 5
Pros: Captures an early milestone from Walt’s career
Cons: Overall effect darker than it should be
The Bottom Line:
Walt risks chasing dream
Captured as this series starts
DisNerds will love it


Remembering a Gamble that Paid Off

I’ve been a Disney fan as long as I can remember.  I just enjoy the magic of most of the films they produce, and the parks are absolute fun no matter how many times you go.  So when Disney started producing a series of ornaments the commemorated Disney’s legacy by highlighting milestones along the way, I absolutely had to get them.  As a logical first step, we start with 1923 - Walt Arrives in L.A.

This ornament features Walt standing behind a camera.  He’s actually looking next to the camera at the action he is filming.  Walt and the camera are both standing on a black base that has “Walt Disney – Los Angeles – 1923” written on it.

My first thought when I saw this was “What is Walt doing filming live action?  He didn’t start doing that until later in his career?”  And I call myself a DisNerd.  When he moved to LA, he was still making the Alice shorts, which features a live action girl in an animated world.  Those would indeed be filmed with a camera like the one pictured here.

Still, I do have a couple of complaints with the ornament.  Walt and the camera are bronze, designed to look like this is a statue commemorating the event.  Yet between the black base and the dark bronze color, the result is an overall dark ornament.  You have to really look closely to see the details.

And when you do, you’ll see that Walt’s face doesn’t exactly look like Walt.  Oh, I know he would be younger than the man we are used to seeing from late in his career.  But still, he just doesn’t look right to me.  I can’t place my finger on what or why.  Who knows, this may be something else I am getting wrong.

Either way, the flat base means you can set this out and display it year round if you so desire, which is a nice feature.

Of you can hang it on your tree.  Since this is a Disney Story ornament, it comes with a red ribbon through the loop, so it is all ready to hang.  It tips ever so slightly to the front right corner, but once you get it nestled in the branches on your tree, you’ll never notice.

Unlike many Disney Story ornaments, this one is actually fairly light.  I often worry about these ornaments slipping off and breaking, but I don’t think that will be an issue with this one at all.

This series is limited and only available on line, so you’ll never be able to find it in any stores.  The series started with this release in August, and so far each entry has sold out in about a week.

Which makes me glad I didn’t hesitate too long before jumping in to start the series.  1923 - Walt Arrives in L.A. could be a little better, but it’s still a good start to what promises to be a magical series for DisNerds like me.

Be sure to check out the rest of the Moments that Made Disney series.