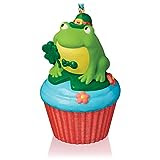 Stars: 5 out of 5
Pros: Different choice makes for a fun ornament
Cons: Those looking for pure green will be disappointed, slight tip forward.
The Bottom Line:
Frog for Ireland?
Yes for next punny cupcake
Different yet fun


Your Luck Will Change by Leaps with this Cute Cupcake

I have to just marvel at how creative the team of artists at Hallmark is.  Their Keepsake Cupcakes ornaments have featured some unusual animals at times, but once I seriously look at the ornament, I wouldn’t want them any other way.  Take the March entry.  Naturally, we’ve got a St. Patrick’s Day theme with Lucky Leap-rechaun.  While I wouldn’t have picked a frog for the animal, it works perfectly.

Frogs are usually green, or at least they are usually depicted that way, which is fitting with the Irish theme.  Sure enough, we’ve got a green frog sitting on top of this cupcake.  He’s wearing a small leprechaun top hat and holding a four leaf clover.  And he’s sitting on a green lily pad.  The pad is on top of the blue frosting that makes up the top of the cupcake itself.  Sadly, we can’t see any of the cupcake because it is either hidden under the frosting or behind the orange cupcake liner with some orange frosting flowers accenting the blue frosting.

Now, if you are looking for an ornament that screams green, this will be disappointing.  While the frog is very green, he hides much of the lily pad, so the bottom part of the cupcake is very blue and orange.  However, the overall cupcake really works well.  I especially like how they brought in the orange color, which is the Protestant color in Ireland, something we don’t normally see when thinking about the country.

And, of course, there is the pun in the title.  As a lover of puns, I have to appreciate that.

Like the others in the series, this has a nice flat base, so setting it out to display year round is very easy.  And you’ll find the 8 in a Christmas tree series marker on the bottom of the ornament.  (Can you believe we are two thirds of the way through this series?)

When you slip a hook through the loop on the frog’s hat, you’ll find that he does tip forward.  It’s enough to be noticeable, but if you are hanging the ornament, you can probably disguise that with branches or something like that.

I would have expected a leprechaun to be on the cupcake for March, but I like the frog so much more.  Lucky Leap-rechaun is another cute entry in what continues to be a fun series.

And be sure to check out the rest of this delicious year of Keepsake Cupcakes.