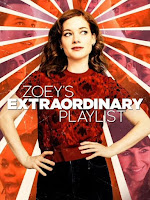 One of the unexpected pleasures of last year was Zoey’s Extraordinary Playlist, so I was excited when it came back at the beginning of this year.  While I did have a couple of issues with season 2, I still mostly enjoyed the show.

If you’ve missed it, it follows Zoey around as she tries to deal with her personal and professional life.  However, there is a fun twist – she can hear what people are truly feeling as they express themselves to her in song.  It makes life crazy at times, but is part of the fun for us.

This season picks up a few months after the season 1 finale, and Zoey (Jane Levy) is finally ready to return to the world.  When she does so, she finds out there are some big changes at work, including a promotion for her.  She also makes a decision about her love life, choosing between Max (Skylar Astin) and Simon (John Clarence Stewart).  Or does she?  Meanwhile, the rest of her family is trying to deal with their loss.  For mother Maggie (Mary Steenburgen), it means figuring out how to move on personally and professionally.  Meanwhile, her brother, David (Andrew Leeds), tries to figure out what to do with his life after finding his job too stressful.  Her sister-in-law, Emily (Alice Lee) deals with depression.  And Max and Zoey’s friend Mo (Alex Newell) start working on opening a business together.

If this is sounding heavy, don’t worry.  While there are definitely some heavy storylines and moments, the show usually does a good job of balancing them out with lighter storylines and moments.  Add in the wonderful singing and dancing during the multiple musical numbers each episode, and you’ve got a show that is actually fun.  Some episodes might lean bittersweet, but most of the time, I feel uplifted when I finish.

Having said that, I do have a couple of issues with the season.  They devoted an entire episode to race issues, focusing on how African Americans and other minorities are treated in businesses.  Yes, it is as bad as it sounds.  It is nothing but a lecture, and it is the worst episode of the season (the entire series, really).

The other is the love triangle with Max and Simon.  I’m leery of love triangles to begin with, but what they did with it over the course of this season was pretty bad overall.  Even after saying that, this is more of a minor annoyance rather than a major issue.

But so much of the season still worked.  The storylines for all the characters were entertaining, and kept me interested to see what was going to happen next.  They managed to switch things up with Zoey’s powers a few times in fun and creative ways.  It really is hard to turn this show off without a smile on your face.

The actors are all phenomenal.  Not only are they acting, but they are singing and dancing, and they don’t miss a beat.  (Pun always intended.)  Honestly, I want to see more of the cast in musicals going forward.  There are some very impressive vocalists here.

Sadly, the ratings haven’t been strong for the show, and it was cancelled at the end of this season.  Happily, we are about to get a Christmas musical movie (coming December 1st) to help wrap up some of the storylines left opened at the end of the season.  We can thank Roku for rescuing the show, and this movie will be airing there.  You can bet I will be watching.

Like the first season, season 2 consisted of thirteen episodes.  They are roughly 42 minutes each in length, but it really is amazing how quickly the episodes and the entire series can fly by.

Despite a couple of sour notes, the second season of Zoey’s Extraordinary Playlist was filled with the great mix of fun and series we came to expect from the first season.  If you’ve missed this show, you’ll be thankful you went back and watched it.