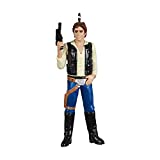 Han Solo is Ready for a Little Action

Last year, Hallmark released mini ornaments of Luke Skywalker and Darth Vader.  They are expanding on them this year with a couple of new miniature ornaments.  One of those is Han Solo.

I’ve got to admit, of the Star Wars ornaments released in the last couple of years, this is the hardest one to identify.  Maybe I’m just being too picky.  Han is wearing his trademark white shirt and black vest.  He’s got blue pants and black boots that go up to his knees, and his pistol is in his hand.

This is a classic look for Han, so I’m not completely sure why I don’t recognize him right off.  It might be because his face is so small that it is hard to recognize him.  Don’t get me wrong, we can see eyes, nose, and mouth.  But it just feels like it’s a generic human.  Then again, I felt the same way about Luke last year.  It was just, with his lightsaber, it was easier to figure out who Luke was supposed to be.  And this isn’t a new complaint, either.  I’ve felt that way about the full-sized ornaments, too.

And maybe I’m just being picky.  Han looks good, but not quite as great as I normally expect from Hallmark, even with their miniature ornaments.

Make no mistake about it, this is a miniature ornament.  Han is barely bigger than an inch in height.

The ornament will stand up on its own.  Han is standing on his feet, so it’s not super stable, however.  I’d be careful about where I was going to set this out since the ornament is so small and could easily be lost.

I’m planning to hang mine on my miniature tree this year.  I’m happy to say that Han hangs straight when you slip the hook through the loop on the top of his head.

I’m happy to have more pop culture miniature ornaments, and overall, I do like this Han Solo ornament.  If he were just a little better, he’d be perfect.