Somewhere along the way, I fell off the Book Beginnings and Friday 56 train, didn't I?  I think it's time I started participating again.

And I'm going to start with Tropical Depression by C. Michele Dorsey. 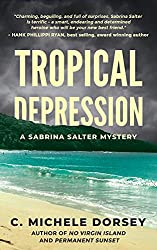 This is the third in a series set on St. John, and it's been years since book two came out.  I was thrilled to see a new entry in the series arrive.

Honestly, you'll see why I was prompted to participate again when you see this beginning.

It wasn't the welcome Sabrina had expected when she returned home to paradise after a three-week vacation in hell.  She had barely closed the door to the Ten Villas van Henry had picked her up in before he hit her with the news.
"You're going to kill me and I can't blame you."

Isn't that a fantastic start to the book?

Meanwhile, over on page 56 we find this:

"I guess there's even more about you I didn't know, Cornelius," she said, embarrassed by the hiss in her voice.

I'll admit, there were a couple of good quotes on page 56, and I almost pulled another one, but this one was a little less of a spoiler.  And fans of the series will be surprised to find out who she is talking to.

That's it for this week.  I hope you'll come back on Thursday when I review this book.  Have a great weekend!