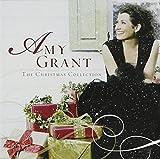 Stars: 5 out of 5
Pros: Classic Christmas music all in one place; good new songs

Cons: "Baby, It's Christmas;" should have included more of Amy's originals
The Bottom Line:
Can't deny it's great
Even if I'd make changes
Christmas music musts


Almost All of Amy's Christmas Best (In a Great Collection)

These days, every artist seems to think they deserve a "Greatest Hits" collection, usually after only three releases. So it hardly surprises me that Amy Grant decided to release The Christmas Collection, a collection of her best Christmas music. After all, her three original Christmas disc are perennial best sellers. And the oldest one dates back to the early 80's. Heck, they are among the first I pull out every year. And these songs will put you in the Christmas mood in nothing flat.

But before we get into what is on the disc, let's discuss the biggest flaw. Amy's releases are some of the best at balancing the traditional songs that everyone sings with the new songs she has written. And her new songs have often become classics in their own right, being covered by many other artists. This disc seems to be focused more on the traditional songs, however. True, some of the songs included were Amy originals. (There's no way she could have released this disc without some of them.) But some of her best originals are missing. Specifically, I would have loved to see "Christmas Hymn," "Love Has Come," and "Emmanuel (God With Us)" show up here. Couldn't we have squeezed them in somehow? I can think of a couple of tracks to leave out. (Not because I don't like them but because these are better.)

Now that I've got that out of my system, shall we discuss what is here?

Like all good collections, this one has new tracks. In fact, there are four of them. And they are the best stuff I've heard from Amy in the last decade. The disc opens with "Jingle Bells." But this isn't your normal version; it's the one made famous by Barbra Streisand over 40 years ago. If you don't know what that means, I can sum it up in one word - fast. It almost seems like it is a race to finish the song and is a little silly at times. Now my dad has never cared for this arrangement, but I love it, so getting another rendition is fine by me. Amy's accompanied by a full orchestra and manages to get all those words in there. I bet she was panting at the end.

The next new track is one of the new Amy originals unique to this release. "I Need a Silent Night" pleads for some time to reflect on the meaning of Christmas amidst the craziness that we call December. It's a mid tempo pop song with the standard pop guitar, drums, keyboard. And Amy's daughter recites Luke 2 part way through. I really do love this song. It alone was worth the price for me.

The other Amy original isn't nearly as good. "Baby, It's Christmas" is a love song co-written with her husband, Vince Gill. It's a slow jazzy song highlighting piano and an orchestra. For my money, it's too slow and boring.

Rounding out the new tracks is "Count Your Blessings," a cover of the song made famous by Bing Crosby in the movie White Christmas. It's got a pretty music box opening that trades places with an orchestra. I'm not too familiar with the original, but this versions seems to fit the slow song I remember from the one time I saw the movie. My only problem with the song is why is it a Christmas song? But don't worry, I feel the same way about "My Favorite Things." Love the song, hate hearing it at Christmas times.

The remainder of the 14 tracks are all Amy's favorite tracks from her first three releases. A Christmas Album gets 4 tracks. "A Mighty Fortress/Angels We Have Heard on High" features strong horns. "Hark! The Herald Angels Sing" begins a cappella but quickly brings in keyboard. "Sleigh Ride" is a fun version of the classic with plenty of bells. Rounding out the tracks is "Tennessee Christmas." And if this CD hadn't included that track, there would have been rioting in the streets. (Well, maybe not, but let's ignore my exaggeration, okay?) It's a quiet song with plenty of hand picked guitar as Amy thinks about going to or for Christmas but concludes "Oh, you know I want to be home." This has become one of the first songs I must listen to every Christmas. These songs sound slightly dated, but for the most part they hold up well for being 25 years old.

While I enjoy A Christmas to Remember, I don't think it is nearly as good as Amy's other two Christmas releases. She must agree with me because only two songs from that disc made it here. The title track is a fun pop song that sings about how special this year's Christmas celebration will be. It's filled with mentions of so many things I love about the season, including music, Christmas decorations, movies, presents.... It always makes me smile. The other song is "Silent Night." Unsurprisingly, the song is slow and quiet with a minimum of instruments backing Amy and a choir.

That leaves the remaining eight tracks for Home for Christmas. Once again, Amy and I must be in sync since I think it is her best Christmas release. Of course, she does leave out two of the originals I love so much to include more of her covers. And what covers they are. "Have Yourself a Merry Little Christmas" closes this disc, and it is perfect for the part. This strings rich version is the one that made me fall in love with the song in the first place. "Winter Wonderland" jazzes things up slightly with some triplets that you won't hear anywhere else. "It's the Most Wonderful Time of the Year" is a rarely recorded song. In fact, Amy's version was my first version of it. It's a fast, pop version that is lushly filled in by an orchestra. And, yes, she does include "Breath of Heaven" and "Grown-Up Christmas List" which have gone on to be recorded by tons of other artists after Amy wrote one and recorded the other. "Breath of Heaven" is written from Mary's point of view as she contemplates what being Jesus' mother will mean. "Grown-Up Christmas List" finds Amy wishing for some very mature things like peace on earth and hoping Santa will come through for her one more time.

All told, you get just over an hour and 18 tracks for your money. That should be enough to make even Scrooge happy.

I will admit that I would have preferred to see Amy record an all new Christmas project instead of The Christmas Collection. But that doesn't mean this is a bad release. Long time fans definitely will want these four new tracks one way or another. And if you aren't familiar with Amy Grant's other Christmas releases, this is a good introduction.

CD Length: 62:05
Tracks:
1. Jingle Bells
2. It's the Most Wonderful Time of the Year
3. I Need a Silent Night
4. Winter Wonderland
5. Baby, It's Christmas
6. Sleigh Ride
7. Count Your Blessings
8. Hark! The Herald Angels Sing
9. Silent Night
10. Breath of Heaven
11. Joy to the World/For Unto Us a Child is Born
12. Grown-Up Christmas List
13. Rockin' Around the Christmas Tree
14. Christmas
15. A Christmas to Remember
16. O Come All Ye Faithful
17. A Mighty Fortress/Angels We Have Heard on High
18. Have Yourself a Merry Little Christmas
Posted by Mark Baker at 8:30 PM