Music Review: Speaking Louder Than Before by Jeremy Camp 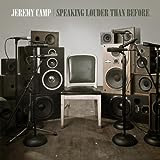 Cons: ...that can all blend together at times
The Bottom Line:
More variety
Would make this good release
Become truly great


Jeremy Camp Sings Louder than Before, Which is Great News

When Jeremy Camp appeared on the scene, he immediately took the Christian music world by storm with his strong rock music and even stronger lyrics.  Speaking Louder Than Before is his fifth studio release (not counting special releases).  Time hasn't dampened his pen one bit.

Those looking for hard rocking Jeremy Camp will be slightly disappointed.  Yes, there are hard rockers like "I'm Alive" and "Giving You All Control."  But most of these songs are mid-tempo rock.  There's a strong beat and heavy electric guitar, however, that still gives it that rock edge.

A perfect example is "Slow Down Time."  This Brit inspired opener is a sold mid tempo.  Ironically (considering the subject), the tempo does increase for the chorus.  This one is pretty much just guitar and drums as Jeremy sings of his desire to slow down his life to spend more time with God.

The title track is a definitely upbeat rocker.  Here, Jeremy sings of the need to share the good news of Jesus with a world in need.  And the tempo absolutely works.  This song is a call to action, and it's hard to sit there passively while the song is playing.

"There Will Be a Day" slows things down again.  In fact, there are some strings in there with the finger picked guitar.  This ballad is a beautiful reminder that our ultimate hope is in our future in Heaven.

"I Know Who I Am" and "I'm Alive" make for a nice pair of songs.  The first is a mid tempo anthem that takes about the weakness of fighting sin without God's help.  As previously mentioned, "I'm Alive" is straight up electric guitar rock with a strong driving beat.  While the first song was about the inability to fight sin, this song talks about being the new man being alive in Christ.

"You Will be There" starts out slowly with a heavy strings presence, but when it reaches the chorus is speeds up and throws in more guitar.  It keeps switching back and forth, which makes for a neat contrast.  And the lyrics?  They are taken almost directly from Psalm 139 which talk about God's presence in every moment of our lives.  Since that is one of my favorite Psalms, it's easy to see why I love this song.

"So in Love" is a full out praise song.  Slightly slower than mid-tempo, it praises God for His love, grace and mercy and offers our love as the only response we can give.  There is a heavy keyboard influence here.

The first time I heard it, I fell in love with "My Fortress."  Another mid-tempo ballad, this one reminds us that if our hope is in God, we have nothing to fear.  That's a great thing to remember as we watch the news in these uncertain times.

But Jeremy speeds things up one more time before the end with "Giving You All Control."  We're back to guitar and driving drums as Jeremy surrenders his life to God.

And "Surrender" is also the title of the final track.  By far the slowest song on the disc, this piano led ballad is a quiet prayer to be used by God to advance His kingdom.

Really, my only complaint with this disc is the same one I have had before.  The changes between songs are subtle.  While a few tend to stand out, most will blend together unless you are giving the disc your undivided attention.  Of course, that could be me since I normally don't listen to music this rocky.

Jeremy Camp's legion of fans will certainly love Speaking Louder Than Before.  It's another solid rock offering with lyrics that will lead you in praise and self-examination.