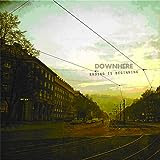 Stars: 5 out of 5
Pros: Thoughtful lyrics and great music

Cons: Not quite as good as their last release
The Bottom Line:
More downhere magic
Fun to hear, thoughtful lyrics
Well worth it to buy


Challenges to Keep Going Through Endings and Beginnings

As soon as downhere announced their 4th studio release, I started counting down. Ending Is Beginning was waiting for me when I got back from vacation, and I anxiously put it into my CD player. On first pass, I wasn't blown away. But as I've listened to it and let the lyrics really sink in, my opinion of it has grown.

Now I should point out that this CD had a really hard job. It comes on the heals of Wide Eyed and Mystified, considered by most fans to be downhere's best release to date. Anything is going to have a hard time living up to that level. It comes darn close, however.

Downhere is a Christian soft rock band that originally hails from . What sets it apart, at least to me, is that members Marc Martel and Jason Germain share lead vocal duties. This allows them more freedom then most bands to turn many songs into duets. It adds a layer to their music I really like.

Reviewers often attempt to find one or two overlying themes for a CD. And, yes, I've fallen into that trap a time or two myself. But in this case, I think it works. While not all of the 12 new tracks here fall into one theme, the big picture seems to be an attempt to encourage us to face life head on despite challenges.

The disc opens with a song of encouragement. "Bleed for This Love" is a mid tempo rocker. Written from God's point of view, the song reminds us that, after dying for us, He won't abandon us during our time of pain. It's got a catchy melody unlined by strong guitar, and they play with the volume a couple times to really catch your ear.

Our response is up next. "Here I Am" is a song of commitment. While they admit "I am a man of dust and stains" they continue "You move in me so I can say/Here I am, Lord send me." Keyboard is the predominant instrument here, and the song is slower. But it's just right for this prayer.

I'll admit, I didn't get "Cathedral Made of People" until I truly listened to it. The verses ask how you would face persecution while the chorus reminds us that, since we have God's Spirit in us already, we will be victorious in the end. Jason and Marc really play off each other in this song, often trading lines in the verses before tackling the chorus with great harmony. And it's a pure guitar driven rocker, which makes it rather fun.

The longing for heaven, is the subject of two songs. "My Last Amen" actually starts out sounding like one of those old time movie soundtracks before quickly dissolving into a guitar heavy rocker. "Hope is Rising" is a quieter piano ballad.

On the other spectrum is "Don't Miss Now." Another quiet piano ballad, it challenges not to get so caught up looking forward to Heaven we miss the joys of life here and now.

There are also several songs dealing with the struggle against sin. My favorite of these is the humorous "The Problem." While the song starts out wondering who to blame for the misery in the world, they quickly hit the real reason, "It's not the age old mystery we've made it out to be/Yeah, there's a problem with the world/And the problem with the world is me." The tune is catchy, and the mid tempo is fun. Okay, so it's not as great as Shaun Grove's take on the same issue from White Flag, but I really enjoy it.

On the more serious side of the same topic are "Something Heavenly." This is pure Paul from Romans 7 as they sing "I'm so far from what I wanna be/Oh, I really am my own worst enemy." This song really benefits from the driving drums on the chorus and the minor key. This dichotomy is also the subject of the piano ballad "All at War." I love the lines here as they discuss the contradiction that being a Christian represents.

Repentance is the subject of "Coming Back Home." Yet this isn't the slow ballad you might expect. It's an upbeat song that offers to let Christ wear the crown to conquer sin once and for all.

The final original track is the piano ballad "The Beggar Who Gives Alms." It's actually a simple confession that they don't have any special insight. They just take what God reveals to them and turn it into songs.

Now, in case you haven't noticed, I've worded things carefully thus far. See, there is a bonus 13th track on the disc. "How Many Kings" originated on a multiple artist Christmas CD last year and became a huge hit for the band. They've included it here to make it easier for fans to find. A piano and guitar duet, it marvels anew at God becoming man for us.

Ending Is Beginning might not be downhere's best release to date, but it's very close. I'm rounding up from 4.5 stars to give it 5. This will please their hard core fans and potentially earn them even more.