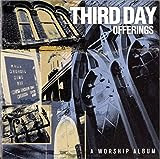 After several years of frequent requests for a live CD and a worship CD, Christian rock band Third Day decided to combine them into one CD.  The result was Offerings, and the unique combination made it stand out in the glut of other worship CD's released around that time.

The disc can pretty much be broken in half.  The first is the new studio tracks.  While not all of them are Third Day originals, they recorded all of them for the first time here.  "King of Glory" opens the disc and sets the tone.  It starts with quiet guitar, but it moves to mid-tempo rock mode when they reach the chorus.  "These Thousand Hills" uses hills in several ways as it reminds us of reasons to worship.  "You're Everywhere" is actually from a practice take of the song, which accounts for the weird instrumental bits at the beginning.  Once it starts, it plays as a brooding, slower reflection on God's omnipresence.  "All the Heavens" is another slow song, this time reflecting on the fact that the almighty God desires to dwell with man.

The final studio track is a cover of Bob Dylan's "Saved."  I've never heard the original, but this one is fast rock with a touch of Southern Gospel.  It's a fun sound, but it is the only track that doesn't quite work for me, especially with the more serious songs surrounding it.

Mixed into these five songs are six Third Day classics recorded live in various concerts.  The first is "Your Love, Oh Lord," a mid-tempo mediation on God's love taken from Psalm 26.  They reflect on his faithfulness in the more upbeat "My Hope is You," based on Psalm 25.  There's a version of their recent hit cover of Michael W. Smith's "Agnus Dei."

And yes, three of the tracks are from their fan favorite first release.  "Thief" is a bit of an odd choice in that it tells the story of the thief on the cross who repented.  Yet is there anything better to lead us to worship than God's mercy?  "Consuming Fire" is one of their signature songs and probably the hardest rocker on the disc.

My favorite song here is also my favorite Third Day song, "Love Song."  Written from God's point of view, it reminds us what God would do and has done to show us His love.  It's a solid rock ballad, and is quiet enough you can hear the live audience singing along.  Do keep listening for a hidden track that actually closes out the disc.

Third Day is a rock band, and I'm not normally a fan of their hard rock.  But this disc contains mainly slower songs while still incorporating the bands' normal guitar and drum heavy sound.  Think of it as rock light.  That makes it my favorite from them.

Fans looking for Third Day's signature hard rock will probably be disappointed.  But those looking for Offerings of worship will really love it.
Posted by Mark Baker at 4:57 PM